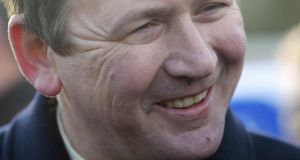 Trainer Charles Byrnes is appealing against a six month ban after being found to be “seriously negligent” when one of his horses was “nobbled” with a sedative at Tramore in 2018. File photograph: Inpho

News of the Charles Byrnes trained Viking Hoard being ‘nobbled’ with a sedative at Tramore in 2018 has left jockeys shocked and been described as “almost Dick Francis stuff, it’s so dangerous.”

That’s according to the secretary of the Irish Jockeys Association who said the unidentified third party who doped the horse with ACP had “no regard whatsoever” for either horse or rider.

Jockey Kevin Brouder pulled up Viking Hoard after jumping six flights of hurdles at Tramore on October 18, 2018. That was after the horse was found to have 100 times the limit for ACP in his system.

The IJA spokesman Andrew Coonan - himself a former amateur rider - said the case was “appalling” and that only good fortune had prevented a serious incident for Brouder and potentially others riding in the race.

“It’s appalling to think anyone could do such a thing and endanger both horse and rider. They obviously have no regard whatsoever for either. It’s almost Dick Francis stuff, it’s so dangerous,” he said on Monday.

“Anyone who understands what’s involved knows a horse absolutely has to have his senses about him and has to have full knowledge of what he’s doing.

“We know the dangers of a horse that might not necessarily be schooled properly. But to think someone would prevent a horse having his full wits about him is appalling. It’s about as dangerous as it gets. It is akin to riding a horse blindfold, and is arguably even more dangerous for the rider and other riders around them,” Coonan added.

He characterised the mood in the jockey’s room as one of shock on the back of last week’s revelations that resulted in Byrnes getting a six month ban after being found to be seriously negligent. His appeal will be heard in the coming weeks.

Coonan said: “A horse administered something as crude as that: ACP is a very basic drug to sedate an animal and to find that that was administered is shocking from a rider’s point of view.”

He also described the case as a huge “rarity” for an organisation more used to engagement with the Irish Horseracing Regulatory Board over more mundane matters in relation to ensuring optimum safety practises on-course.

“We don’t factor into our daily equation that a horse might be doped. It’s appalling to think it could happen and the timeline, as suggested by the chief veterinary officer, seems to be that it may well have occurred in the stable-yard. That’s really concerning,” Coonan added.

Horse Racing Ireland’s chief executive said on Monday that integrity is in the best interests of all participants but doesn’t fear sponsorship will suffer on the back of negative headlines in relation to drugs.

As well welfare and safety aspects, the doping of Viking Hoard has also seen a spotlight shone on betting patterns including how the Byrnes trained runner was laid to lose on the Betfair exchange with one punter wagering €34,889 to win €3,200.

That case has come on the back of widespread negative coverage in relation to the question of doping generally in racing. In October top trainer Jim Bolger described drugs as the biggest problem in Irish racing. He also said he doesn’t believe a level playing field exists.

“I don’t generally think so. It is something you always have to be aware of and it’s something to be taken seriously in that context,” said Brian Kavanagh.

“People are naturally trying to understand what happened. But you have to put it in context as well, in terms of the number of these cases seen over the years which are very few.

“In terms of its broader impact I think it behoves all of us to uphold the integrity of the sport and to ensure that people in whatever capacity, viewer, gambler, sponsors, people going racing, know it is run with integrity.

“That’s a job that always there to be done and we will get stuck into that,” he added.

Kavanagh also pointed to how sponsorship levels within Irish racing have generally held up over the last 10 months despite the broader impact of the coronavirus pandemic.

“We recently had the announcement of new sponsors for the Irish Champion Hurdle (Chanelle Pharma) and Savills renewed sponsorship of the big chase at Leopardstown over Christmas.

“The Curragh had a strong performance last year too with the renewal of Dubai Duty Free and new sponsors for the Irish Oaks and the Pretty Polly.

“Certainly at some of the smaller tracks a lot of sponsors are rooted in local communities and businesses. So I don’t see it in those terms,” Kavanagh added.