Aidan O’Brien will look to break world record next weekend 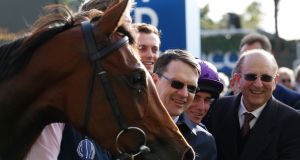 Aidan O’Brien is likely to throw plenty of ammunition at the three Group One races in Europe next weekend in an attempt to claim the world record for most top-level victories in a year outright.

The master of Ballydoyle drew level on 25 victories with the late Bobby Frankel when Hydrangea won the British Champions Fillies & Mares Stakes on Champions Day at Ascot.

It has been an amazing season for O’Brien, 48, who is never slow to credit others with success. The likes of Churchill, Winter, Roly Poly and Hydrangea herself are all multiple Group One winners.

“I think it’s the best group of horses we’ve had, a whole team in all different sectors,” said O’Brien.

“They’ve progressed all season, a lot of them are very well bred, by Galileo, and they’ve improved all year.

“It’s a big team effort, there’s a lot of links in the chain and everyone works so hard.

“The lads [Coolmore] put a lot of effort into getting the right people for the team.”

With the season drawing to a close opportunities are running out for O’Brien, but there are chances at Doncaster and Saint-Cloud next weekend.

“There’s the Racing Post Trophy and two races in France next week so hopefully we’ll have plenty of runners,” O’Brien told ITV Racing.

“Galileo was very special, just as a racehorse and now as a stallion. We do our best, it’s very hard to get our ducks in a row all the time, we’re very grateful whenever we win.”

Part-owner Michael Tabor could not speak highly enough of O’Brien, but also credited the team effort.

“It is a fabulous achievement by Aidan. It is incredible. Really, words can’t describe how dedicated he is and the whole family. It is a marvellous achievement.

“He is a modest man. He is not one to go shouting from the rooftops, that is the way he is. I am sure when he gets home at night he sits back in a chair and maybe watches a replay and takes great satisfaction from it, like we all do.”

“Knowing Aidan, he will be keen to deflect as much praise as possible and will rightly shine a light on his team at Ballydoyle, his owners and the horses in his yard. But this is very much a personal landmark in the career of an exceptional trainer.

“We have seen that in Ireland for a quarter of a century, but with this world record will come due global recognition for a brilliant Irish horseman.”

As well as reaching Frankel’s landmark, O’Brien was confirmed as champion trainer in Britain for the sixth time, being presented with his trophy by runner-up John Gosden, after the latter had won the Champion Stakes with Cracksman.

O’Brien added: “We’ve been very lucky to have an awful lot of very special horses.

“We have had horses who have run strongly all season, we’ve been very lucky.”

AIDAN O’BRIEN’S GROUP ONE WINNERS IN 2017