Wait for 25th seasonal Group One goes on, Saturday’s Fairyhouse meeting called off 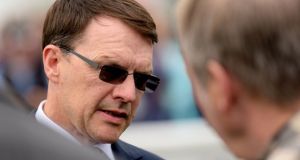 Aidan O’Brien hit the bar again as Johannes Vermeer finished third behind Boom Time in the BMW Caulfield Cup at Caulfield on Saturday.

O’Brien is just one winner away from equalling Bobby Frankel’s record of 25 victories at the highest level in a year and Johannes Vermeer was well supported for this 12-furlong heat.

Johannes Vermeer was beaten just a head in the Ladbrokes Stakes last Saturday and Ben Melham was happy to settle in the chasing pack as first Amelie Star and then Sir Isaac Newton took the field along.

Sir Isaac Newton, who was trained by O’Brien until this year, built up a healthy lead of 10 lengths with around five furlongs to run, but he was quickly reeled in before the top of the straight with Boom Time poised to challenge while Johannes Vermeer was on his heels.

When Cory Parish gave the signal, Boom Time kicked on with about a furlong to run but Johannes Vermeer could not quite follow him through, eventually finding a gap to narrowly lose out on second to Single Gaze.

Hughie Morrison’s Melbourne Cup hope Marmelo ran an eyecatching race in the hands of Hugh Bowman, making up plenty of ground in the straight to finish just out of the frame.

Saturday afternoon’s meeting at Fairyhouse has been called off due to high winds.

Officials at the track consulted with Met Eireann this morning and opted to cancel the card on health and safety grounds.

Horse Racing Ireland tweeted: “Following consultation between Met Eireann and course officials, today’s fixture at Fairyhouse has been postponed due to high winds.”

The fixture has been rescheduled for Tuesday, with fresh declarations to be made on Monday.

1 Monica Seles: The warrior queen who could have been the best ever
2 Red Bull poised to protest over Mercedes’ new steering system
3 The Best of Times: Ireland’s Golden Generation make Grand Slam history in 2009
4 Welcome to Iten in Kenya – home of champions and cheats
5 World Athletics freezes out Russian athletes after $5m fine goes unpaid
Real news has value SUBSCRIBE