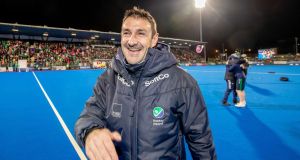 If all concerned can come down off Cloud Nine in time then the new Hockey League campaign will get under way on Saturday, and for players with international aspirations there has never been a greater incentive to catch the eye of the Irish coaching team.

Before returning to his family in New Zealand ahead of Christmas, Sean Dancer will finalise his plans for the build-up to the Olympics and will, no doubt, hope that Taoiseach Leo Varadkar’s promise of increased funding will allow for the quality of programme he will feel is necessary for the players to prepare for their Tokyo challenge, as well as enabling them to go full-time – or close enough to it – in the months ahead.

The top 10 nations in the world rankings have all qualified for the Olympics – the Netherlands, Australia, Argentina, Germany, Britain (who take England’s ranking), New Zealand, Spain, Ireland, India and China, in that order – as well as hosts Japan.

Although South Africa have also qualified, their Olympic committee is likely to turn down their invitation from the International Hockey Federation because its team does not meet the criteria, in terms of ranking and results, that it sets for them. Unless they have a change of heart, then Korea will take South Africa’s place.

The schedule for the tournament, which will take place from July 25th to August 7th, will be released next month.

A gruelling one it will be too, the teams playing five games in eight days, the demands even greater on squads than in ‘regular’ tournaments because only 16, rather than the usual 18, players can be selected for the Olympics (as well as two non-playing reserves). At least two of the players who were part of the effort to get past Canada last weekend will, then, miss out on the experience. It shows the, at times, cruel nature of sport.

Few players demonstrated greater courage during the shoot-out ordeal than Roisín Upton who was brave enough to step up to convert what proved to be the decisive one-on-one in sudden death having missed in the regulation shootout.

And, as she later revealed, she did so with a broken wrist having sustained the injury earlier in the contest.

Catholic Institute will, then, have to do without their star player in the opening spell of their first Hockey League campaign, Upton having helped the Limerick club qualify when she converted twice in the shoot-out that decided their play-off against Queens back in April.

Institute open their campaign against Muckross at Rosbrien, while defending champions Pegasus travel to Dublin to take on Railway Union.

Pegasus are already through to the Irish Senior Cup final where they will play UCD next March, the early rounds of the competition already completed because of the squeezed nature of the season. The students are away to Cork Harlequins in their opening Hockey League fixture, while Old Alexandra host Belfast Harlequins and Pembroke Wanderers are at home to Loreto.