Winner takes all as Ireland and Canada meet for second leg 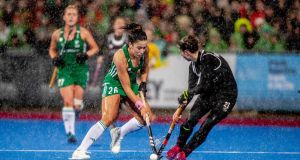 Just about the only things not dampened after a rain-soaked evening in Donnybrook were Katie Mullan’s spirits following the 0-0 draw with Canada in the first leg of their Olympic qualifying double-header, the Irish captain choosing to look on the game and its outcome in a positive light.

“There’s 120 minutes of hockey to be played, that’s the first 60 down, the nervous jitters are out of the way,” she said. “We’ll come out here and fight again tomorrow.”

But while Sunday’s game against the Canadians is now billed as your classic winner-takes-it-all, the prize in this case qualification for Tokyo 2020, it turns out that Ireland could still find themselves on the plane to Japan even if they were to lose to Canada.

There’s rarely a dull moment in international hockey, and on this occasion, the news seeping out before Saturday’s first leg in Donnybrook, it’s the South African Olympic committee that is providing the sideshow.

Despite their women’s team winning, with ease, the African Olympic Qualifier in Stellenbosch back in August, thereby securing their place in Tokyo, their cash-strapped Olympic committee has decided not to accept their Olympic slot.

While the women continue to battle against the decision, looking for support from the International Hockey Federation (FIH), should they be ruled out of the qualification process then an extra Olympic slot would be available. And it would go to the highest ranked nation to lose in one of the four two-leg qualifiers that are determining the final nations to be added to the Olympic line-up.

India have already filled one of those slots, having beaten the United States - who are ranked below Ireland. In the other two ties, Britain are 3-0 up on Chile after their first leg and Germany lead Italy 2-0 after their opening game - both Chile and Italy are below Ireland in the rankings.

So, barring the mother of all comebacks on Sunday by either Chile or Italy against Britain and Germany, who are both ranked above Ireland, then even if Ireland were beaten by Canada in their second leg, they would be in line to take South Africa’s Olympic place.

The muddle won’t, though, be sorted until later in the month, the FIH most probably taking to a darkened room before then, so the only way of making certain of that Olympic ticket is to get the better of Canada on Sunday evening.

And to do so, Ireland must be much more clinical in their finishing, not least from their penalty corners having failed to convert any of the five they won in Saturday’s second quarter.

The conditions, though, were abysmal, any pitch would have struggled to play true under the torrential rain, never mind the temporary pop-up one installed in Energia Park, the sodden surface making it impossible to inject any kind of pace to the team’s passing.

“It was playing really well in the first two quarters,” said Mullan, “but in the second half, with all the rain, it just got a bit slow and we had to change the game-plan slightly to move the ball around like we wanted to.”

Alas, yet more rain is forecast for Sunday evening, so it may not be a whole lot easier to zip the ball about the place and play a fast, pressing game.

Canadian captain Kate Wright smiled, though, at the notion that she and her team-mates might be unfamiliar with such conditions. “I’m from Vancouver and there’s a lot of rain there, so we were ready for the weather. We were gritty, we played a hard, tough defence - and we’ll come out firing tomorrow.”

If they’ve dried out in time, the crowd of 6,086, the biggest ever for a women’s international fixture in Ireland, might just be back. There is, after all, an Olympic slot to be played for.