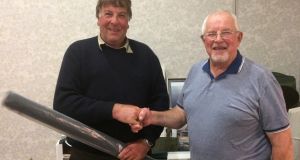 Basil Shields from Oughterard, Co Galway finished this year’s trout season in fine style with two wins to add to his other outstanding achievements over several decades.

Certainly, in my book, he is the most accomplished trout angler in Ireland by a mile. His dedication is immense. In my travels around the country to attend main events, he is there at least three days beforehand scouring the lake for likely hotspots. Homework done, nine times out of 10 he then goes on to win or certainly feature in the competition.

I would say at this stage he has won almost every major competition held in Ireland on one occasion (with one exception, the World Cup Trout Championships). This year he again came close with four good fish, still, fourth placing against a field of over 400 anglers was admirable.

The first of two end-of-season competitions took place on Lough Lein in Killarney with around 50 anglers taking part. The barbecue on Brown’s Island of steaks, onions and sliced spuds greatly helped to lessen the gloom of the ‘last cast’.

Shields came out tops again with five fish to win the Mike Hegarty Perpetual Cup and a plethora of prizes.

Most recently on Carrigavantry Lake in Co Waterford, it was again this intrepid angler who stole the show with 12 rainbow trout. The occasion was the Waterford City and County Anglers annual charity competition.

“I started the day on a DI3 line and caught two, changed to an intermediate and caught a further three and for the afternoon switched to a ‘clothes line’ floater for the remaining seven,” he said.

East Wicklow Rivers Trust discuss the plight of the Atlantic salmon
To celebrate the ‘2019 International Year of the Salmon’, the East Wicklow Rivers Trust, with Prof Ken Whelan in attendance, will discuss and learn about the plight of the iconic Atlantic salmon within their native range in Co Wicklow. Topics for discussion will include a) Where have all the salmon gone? b) Will they ever return? c) Can we do anything to help them?

All are welcome to attend at Coláiste Raithin, Ravenswell, Bray, Co Wicklow this Thursday (Nov. 14th) from 7 pm. Further details available at wicklowrivers@gmail.com or info@wicklowrivers.ie.

The mighty water, home of the 2016 FIPSed World Championships, produced 133 fish with an average length of 69cm. The catch and release event saw all fish measured onboard, recorded and quickly returned to the water alive.

The biggest fish prize on the day was awarded to Team Ireland internationals Tomek Kurman and Jacek Gorny for their 99cm fish. However, a splendid cup and array of sponsored prizes awaits the winning teams along with the biggest individual fish prize.

Visit the club page at Anglersclub.eu for a gallery of images and, for details of further events, see www.anglersclub.eu.

Anglersclub.eu is a modern club passionate about predator fishing with lures actively promoting responsible fishing and is affiliated to the National Coarse Fishing Federation of Ireland.

Gibbons claims the spoils at international trial
The fourth and final trial to select a team for the 2020 Ladies Flyfishing International Championships at Lake of Menteith, Scotland next May, was held recently at Carrigavantry Lake, Kilmeaden, Co. Waterford.

Hosted by Waterford City and County Trout Anglers’ Association, the 22 ladies thoroughly enjoyed their trip to the sunny south east especially with the generous hospitality afforded by the host club and the surfeit of excellent fishing.

Pamela Marten, chair of ILFA, presented the host club treasurer Pat Smith with a cheque for €100 towards their annual charity competition which supports a local charity.

Chew’s magnificent catch
Fishing out from Wicklow Harbour with charter skipper Kit Dunne of Wicklow Boat Charters (087-683 2179), Des Chew caught a magnificent spurdog of 19lb 1oz, classified as the heaviest fish in this category since July 2016. The specimen fell to mackerel strip on a one-up one-down terminal tackle trace.