By every index hate crimes have gone up year-on-year since 2016 election. 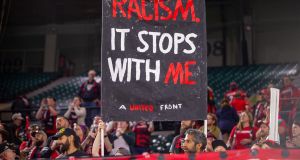 The Salt River High School girls’ volleyball team were trailing 2-1 in the fourth set of their playoff clash with Caurus Academy when their coach, Kyronna Roanhorse, decided to pull them from the game.

By that point she had become concerned for their safety. Her squad is made up of Pima Indians from an Arizona reservation, and Roanhorse had heard enough from a group in the bleachers who had been making tomahawk signs at her players, shouting mock Native American war chants, and calling them “savages”.

When Western Hills’ boys’ soccer team took on Taylor High in the opening game of their season in Cincinnati the match was soundtracked by a steady thrum of racial epithets. With a selection of immigrant teens who were born, among other places, in Honduras, Guatemala, Cuba, Senegal and Eritrea, the Western players were at various times called “wetbacks”, “spics”, “f--king beaners” and “monkeys”.

They were also told to learn English, and advised by their opponents and people in the crowd to “get back to your own country”.

As the African-American members of the Piper Hills’ girls’ volleyball team entered the court during their clash with Baldwin City in Kansas, they were heckled with monkey noises. They were also told that their school was a zoo.

What is astonishing is how widespread this carry-on is. No corner of the country appears untouched by the blight and no sport immune

When they informed one of the referees about what was going on and the type of abuse being hurled, the official approached the opposing supporters and ordered them to move back one row. They did, and from their new vantage point started unleashing a fresh torrent of racially-charged insults (the school has since claimed the students were merely making hunting noises like “quack-quack”).

All of the above incidents have taken place since the start of the current academic year, a period of less than three months. The behaviour of the Bulgarians against England may have rightly garnered huge headlines across the world, but this is a random selection from games involving American teenage athletes marred by racial abuse just this semester.

What is astonishing is how widespread this carry-on is. No corner of the country appears untouched by the blight and no sport immune.

Witness another unscientific sample from the litany of depressing stories available.

In Milwaukee, Oconomowoc and Wauwatosa East high schools are both claiming their players were on the receiving end of racial insults from the other team’s supporters in a grid-iron game between the pair.

In California, the football players and cheerleaders from Lincoln High were repeatedly subjected to racial slurs, including the n-word, from the players and adult fans of San Clemente High.

In western Pennsylvania, the Penn Hills High boys’ soccer team suffered the same insults throughout their encounter with Connellsville. When one of them reacted to taunting by the crowd as he went to take a throw-in, he was told to “shut the f--k up, you f--king n-word”.

In Rhode Island, the appearance of Jamaican and Cape Verdean girls on the Central Falls’ volleyball team prompted students from Burrillville High to shout it’s about “to get dark in here” and to urge them to “get back to your country, you can’t even speak”. That same group of, eh, fans later followed the girls to the car park where, from the back of pick-up trucks, they sang Lee Greenwood’s God bless the USA, and shouted at the Central Falls’ squad “we belong here, this is our country”.

That these are the type of songs and slogans heard at Donald Trump rallies is, ahem, hardly a coincidence. Even if these issues predate his arrival into the White House, there seems little doubt the present epidemic can be blamed on his dystopian regime with its normalisation of racial hatred, constant promotion of casual xenophobia, and a relentless quest to alienate anybody who looks, talks or worships differently from what he perceives to be American.

By every available index hate crimes have gone up year-on-year in an increasingly divided society since the 2016 election.

A report from the University of North Texas established that counties which hosted Trump rallies have witnessed a 226 per cent rise in such incidents compared to counties where he has not made speeches.

Too many of the school districts try to deny the evidence against their students, and too many of the academic governing bodies chose to fudge their findings

That high school football, soccer or volleyball games might become outlets for this type of hatred is inevitable given that these fixtures are one of the rare occasions now when the denizens of the different Americas meet.

“Trump’s America has revealed itself through sports, in ways both complex and visceral,” wrote Tim Layden in a perceptive piece for Sports Illustrated. “But the Trump presidency’s effect on sports goes far beyond the metaphorical.”

More depressing than the litany of incidents is the flaccid responses of those involved in ensuring they shouldn’t happen. Too many of the school districts try to deny the evidence against their students, and too many of the academic governing bodies chose to fudge their findings, preferring to assign racial sensitivity training rather than banning the offending parties from the sports that they have somehow come to regard as a crucial front in the ongoing culture war.

Following an investigation into the allegations against Caurus Academy, the Canyon Athletic Association issued no penalty but set up a new committee to deal with matters of “cultural competency” and ordered the game to be finished at a neutral venue, where added security guards were provided to police the crowd. Just in case.

Not normal. Not now. Not ever.