Irish disappointment was evident at the end of the game. It was a missed opportunity 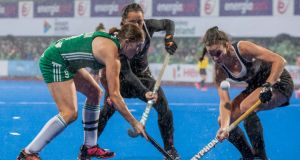 It would have been hard to imagine Ireland ever playing in a game as big as the World Cup final again, but for the current members of the squad who won silver in London last year, Sunday evening’s meeting with Canada in Donnybrook will most probably feel just as momentous. The prize for the winners, after all, will be a place in next summer’s Olympic Games.

And after Saturday evening’s scoreless draw with the Canadians at the same venue, neither side will carry an advantage in to the second of the two-leg qualifier. It will, then, all come down to those 60 minutes.

In front of a sell-out crowd of 6,086 in Energia Park, where a temporary ‘pop-up’ pitch was installed over the existing surface for the two games, Ireland were carrying the burden of the favourite’s tag in to the game against a team ranked seven places below them in the world list (Canada at 15, Ireland at eight), but despite having the better of the encounter, they failed to press home they advantage - and the players’ disappointment was evident at the end of the game. It was a missed opportunity.

Ireland’s Australian coach Sean Dancer was able to name a squad rich in experience for these two games, with 14 of the 18 players who won World Cup silver retained, nine of them with over 100 caps, another two with over 200, and one now with a remarkable 300 caps to her name. Close to 13 years after making her senior international debut against, of all people, Canada, Shirley McCay, already Ireland’s most capped woman in any team sport, made her 300th appearance for her country, the 31-year-old Tyrone woman saluted by the crowd pre-match.

The home side started the game positively, coming close enough to scoring from their first attack of the game when Nicci Daly fired across goal from the left wing, the ball just evading Anna O’Flanagan at the far post. For the remainder of the quarter, though, it was a scrappy affair with possession given away cheaply by both teams, neither able to create clear-cut chances.

Come the second quarter, though, Ireland upped their game considerably, pressing much higher against the Canadians and repeatedly forcing them in to errors. That pressure ultimately led to them earning five penalty corners before the break, but between fine goalkeeping from Kaitlyn Williams and frantic Canadian defending, not least during the scramble that ensued following the third of the set-pieces, the visitors somehow held out.

That was the highpoint of the game for Ireland who struggled to find their rhythm and failed to win another penalty corner in the second half. The erstwhile unambitious Canadians, meanwhile, began to show a little more adventure after the break, Stephanie Norlander forcing goalkeeper Ayeisha McFerran in to action for the first time in the game 10 minutes in to the third quarter.

Four minutes from time they won their first and only penalty corner, and were hoping for more when they referred it to the video referee to see if the ball had hit an Irish foot. No stroke, though, and McFerran saved smartly from Natalie Sourisseau.

Excellent work from Chloe Watkins almost created an opening for O’Flanagan in the final minute, by which time the incessant rain had made the pitch heavy and grimly hard-going for the players.

Not the prettiest of spectacles then, but it’ll soon be forgotten if Sunday evening works out.

Sixty minutes to go, then, in the pursuit of what has long been the Holy Grail for Irish women’s hockey: Olympic qualification.