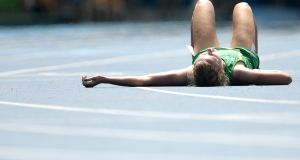 Run as fast as you can, that’s what goes through Greta Streimikyte’s mind on the starting blocks. Stick to the plan if you can but if you can’t, then adapt and run. When you hear the last-lap bell, run faster.

Run as fast as you can comes with some caveats for middle-distance runners. Streimikyte lights up explaining how the game is played. Says a two-second speed advantage can get you over the line but equally you could lose that very easily and get boxed in. She talks about luck, a lot.

“We plan so we know these are the girls; we know their time for the 1,500m and we would think this girl is fast so she might kick at the end,” she says. “So, let’s say if I don’t have that speed, that means I need to go fast at the start. But it’s a championships race, you can plan it as well as you think but you never know.”

At the Paralympics, Streimikyte and coach Enda Fitzpatrick expected a steady pace in the finals. She set a new Irish record in her heat at 4.51.75 but the final was even faster. Breaking her own record with a time of 4:45.06 left her just off the medals.

“It was a great race, it ended up being a great race; I got a PB. I always say it’s never-ending learning, with every race you are learning,” she says.

That year marked a huge change for Streimikyte as she swapped her Lithuanian passport for an Irish one in December 2015, after five years living in Dublin.

So her first race in green was just a few months before Rio; at the IPC Athletics European Championships. One bronze medal in the bag. Not a bad start.

Looking back at the Paralympics, she says: “I can’t remember much. I remember standing at the start line, walking to the start line and then the race began. It’s hard because you are in the moment, you don’t think about anything else.”

When the 2018 World Para Athletics Europeans came round, Streimikyte was ready. Storming home to a clear win in Berlin, she collected her gold to the strains of the Irish anthem.

“It meant so much to me, finally to bring a gold medal home. That’s why it meant so much, even to have the taste of standing on the podium. The national anthem was playing and you are so so proud,” she says.

And almost in the same breath, she flips to explaining running is more than just medals. Streimikyte visits schools as part of the “Dare to Believe” programme.

‘Doing what they love’

She says: “It’s not about making the girls into runners, it’s about doing what they love. If they love football, that’s amazing so go and do football.” Streimkyte praises the 20x20 campaign, saying it’s bringing clubs, media and girls together.

She spends time too talking to pupils who’ve immigrated to Ireland, hoping her story can inspire them to overcome any language or cultural barriers. “I tell them that everything is going to be OK,” she says.

Now 24, Streimikyte came to Ireland as a 15-year-old when her family followed her father to Dublin from Lithuania. She brushes over challenges, saying her brother and sister – they are triplets – came at the same time and they helped each other. She visits her grandmother and friends in Vilnius often, says:

“I always love it. I am who I am because I was born there, and my parents raised me there. It just feels like home in Ireland now.”

A PE teacher in Drumcondra spotted her potential when she tried an 800m race. She joined Clonliffe Harriers. That led to talk of the Paralympics, and 1,500m as the shorter distance isn’t run at the games.

She competes in the T13 category for athletes with a visual impairment. Damage to her retinas shortly after birth left her with Retinopathy in spite of follow-up surgery in Sweden.

She says support for Paralympians is greater in Ireland, that on a cultural level people understand why she runs. But also practically and financially, she says the Games are more visible here.

Streimikyte thinks of herself as an athlete above any labels others puts on her. She doesn’t think her training is necessarily different to someone like Ciara Mageean, saying: “I adapt, you always adapt, that is the thing about Paralympians, we are amazing at adapting because we don’t have a choice. I never overthink this part of training, I just do what I do. Sometimes it works out and sometimes it doesn’t and that’s the only way to do it. My role as an athlete is to train.”

Streimikyte’s mission now is to dampen down talk about Tokyo, to stay focused on the worlds. Scheduled to run on the 14th, she has time to adjust to the heat, and says: “I will have time for a few more sessions and an opportunity to see my team-mates as well. I’m fine and just trying not to get too excited because it’s not the time yet to get excited.”

That time is when the last-lap bell rings.