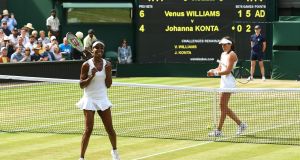 A couple of break points in the first set seemed precious little for Britain’s Johanna Konta to cling to for comfort in her first Wimbledon semifinal.

Hopes of victory turned into a match racing before her eyes, the general mood on Centre Court now downbeat and far from believing that Virginia Wade’s triumph of 1977 would be repeated this year at Wimbledon.

Instead the narrative has become the possibility of Williams bridging a 109 year span as the oldest woman at 37-years-old to win the Venus Rosewater Dish. Her career has fast become one of statements on age, colour, gender and demographics as accumulating trophies.

The scoreline in both women’s semifinals, Garbine Muguruza’s 6-1, 6-1 beating of Magdalena Rybarikova and Konta’s 6-4, 6-2 fall to Williams seemed almost scripted.

There was certainty and unmistakable distance that separated the winners from the losers in both matches. Neither outcomes ever looked like dangerously rocking the other way, the anthesis perhaps of excitement but no less impressive and powerful.

Konta believed she could knock the American from her big moment as her own big ambition and big game persona had shone through during the week, enough to separate her from the British players who are built up to fail. Like Andy Murray, Konta has become one of the authentic actors.

But in the end she did not have the calibre or the might. Maybe on Friday, in some disheartened publications, she will become the Sydney-born player of Hungarian parents. She’ll suck it up.

Williams, with two lives, one of fantastic success and the other of injury and illness, brought all of her Grand Slam instincts to bear as well as her muscular game where the serve was again both an offensive weapon and a lifeline whenever she was in trouble.

Emotional stillness against a waspish opponent.

“When I look across the net, I don’t think it’s the right mentality to believe in that person more than me,” said Williams expressing faith in her ability.

“I am definitely in the position I want to be in. It’s a long two weeks. Now, you know knocking on the door for a title. This is where I want to be.”

Konta, a rock all week remained that way. The 106 mph second serve from Williams, her controlling position, the three service break points the American won from eight earned and Konta’s two looks neither converted, told most of the story.

“Her being able to do that is why she is a five time champion here,” said Konta. “I think she did what she does well. She dictated the match from the very first ball until the very last one. I think she just showed her true qualities and why she is just a true champion that she is.”

Muguruza’s almost facile win over the outclassed Rybarikova will have convinced enough that in Saturday’s women’s final Williams will face a calloused player, who has won a Grand Slam at the French Open before. Muguruza knows what she might face and possesses the tools not to be cowered by Williams’ celebrated power.

Rybarikova was on a Spanish string, pulled and tugged around the grass, unable to apply her slice and dice game against a big back court hitter who took the centre and set to work on running her opponent.

The Slovak had never been to a Grand Slam semifinal before and could show little of her wispy talented game as she was fething so often on almost every point.

But her story is where she came from, which is the faithless ante room of injury and doubt that had her in the mindset that her career was ending. A semifinal was a triumph. But abject defeat didn’t make for a Centre Court spectacle.

A semifinal extinguished in 64 exhausting minutes, the scoreline didn’t lie.

Konta will earn a place in the world’s top five, Muguruza a first Wimbledon final, Rybarikova her career back andWilliams another mark in history. That has been her tennis life to date.