Caroline Wozniacki and Agnieszka Radwanska also get through tricky ties 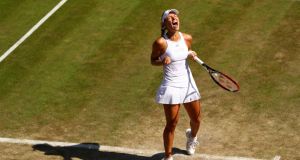 An already wide-open women’s draw was almost decimated as top seed Kerber, former world number one Wozniacki and 2012 runner-up Radwanska all found themselves a set and a break down and staring at first-week exits.

Kerber, who lost to Serena Williams in the final 12 months ago but has been horribly out of form this year, was struggling against world number 70 Shelby Rogers of the United States.

“She played very well from the first point,” said Kerber. “I think the key was at the end that I was fighting, and I was never giving up no matter what the score was.”

Kerber will next play another former runner-up, Garbine Muguruza, while fifth seed Wozniacki battled through to face Coco Vandeweghe.

Dane Wozniacki, who has never been beyond round four at the All England Club, fought back to take the second set of her clash on a tie-break against Anett Kontaveit.

“It definitely was a tough match, but I’m happy the way I fought,” said Wozniacki. “I didn’t give up. I felt her getting just a little bit nervous towards the end, and I took advantage of that.”

Polish ninth seed Radwanska also needed three sets to beat Switzerland’s Timea Bacsinszky, who was struggling with injury in the decider as she lost 3-6 6-4 6-1.

“I think I played on every surface against Svetlana,” said Radwanska. “We have played so many matches, so many good ones, so many three-setters. Playing her is always very challenging.”

Vandeweghe, the 24th seed who is being coached by 1987 champion Pat Cash, has yet to drop a set at the championships after beating fellow American Alison Riske 6-2 6-4.

She said: “I go in thinking I can win. I do expect it of myself, and I have set goals this year to do that. Pat is present at all my practices, and all my matches.

“He’s made a commitment to the working team and I think he’s made a pretty big impact.”