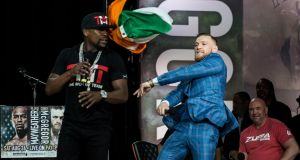 Undefeated boxer Floyd Mayweather is the heavy favourite to win his bout against mixed marital arts champion Conor McGregor but the Irishman again won the war of words at their media conference in Toronto on Wednesday.

A day after McGregor mercilessly mocked the American in Los Angeles to launch a four-day international promotional tour for their August 26th fight, the flamboyant 28-year-old again went on the offensive, ridiculing Mayweather’s attire and landing a low blow with a comment about his rumoured reading difficulties.

“How do I look” McGregor asked the crowd, before taking a swipe at Mayweather’s bag. “He’s 40! Dress your age, carrying a school bag on stage.

“What are you doing with a school bag on stage? You can’t even read.”

Mayweather, dressed casually for a second straight day in a t-shirt and cap while McGregor again wore a suit, did his best to counter.

“You owe money,” McGregor responded, referring to reports that Mayweather earlier this month asked the IRS for more time to pay his 2015 tax bill.

Mayweather, who holds a perfect 49-0 record, was jeered relentlessly by the audience but did not appear rattled.

With McGregor also accusing the American and his team of turning off his microphone a day earlier at the Los Angeles press conference.

At one point Mayweather grabbed an Irish flag from the crowd and posed in front of McGregor. The Dubliner responded by taking his opponent’s bag, taking out the money inside and asking; “is that it?”.

“You do anything with the flag and I’m going to f**k you up on this stage.”

When the flag was passed to the Irishman he tossed it back in the boxer’s face.

Next up, the tour continues in New York City tonight.

United slip up in top four race; reasons to be cheerful for Munster 07:00
Solskjær says Man United did not deserve to beat Southampton 06:36
Gerry Thornley: Munster will make for interesting case study when rugby resumes 06:30
James McClean says he gets no support for abuse he receives 06:34
Tiger Woods returns as Rory McIlroy battles to hold world number one spot 06:00
Here is your handy guide to sport on television this week