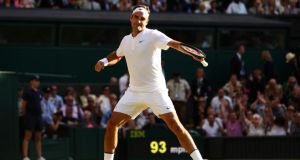 In March Novak Djokovic pulled out of the Miami Open, citing an elbow problem. That arrived after an uncannily similar announcement from Andy Murray 24 hours earlier, which featured an identical injury.

On Wednesday Djokovic lasted just over an hour in his Wimbledon quarterfinal match against Tomas Berdych. Meanwhile, Murray lasted five sets and almost three hours against Sam Querry, but the final two sets were a pale imitation of the defending champion.

British hopes shattered, Serbian aspirations washed out. Both fell out of the draw to trigger the earliest exit of supporters from the grounds for many years in the strangest unravelling of a Wimbledon quarterfinal draw.

Murray was last seen hobbling towards a courtesy car at the back of the media centre, the world number one swinging his damaged hip sideways like an octogenarian.

Murray was clearly in more distress over the injury that snatched hopes of an all British final with Johanna Konta, than Djokovic was about his injured right elbow.

Murray fell 6-3, 4-6, 7-6 (4), 1-6, 1-6 to American Sam Querry with Djokovic playing just one losing set and two games of the second before shrugging his shoulders and walking to the net to Berdych and finish the match with a handshake.

The post portem will centre around what players are doing to their bodies and whether the officials who declined to allow Djokovic play his fourth round match under the Centre Court roof were entirely blameless in his undoing.

Had they switched his match to under cover on the scheduled day, the second seed would have had an extra day to rest his problematic right elbow.

The good news for aesthetes is that Roger Federer conducted a masterclass against Milos Raonic. With poise and sangfroid, he defused the big Canadian’s heavy service game and schooled him around Centre Court for three sets 6-4, 6-2, 7-6.

Federer meets Berdych and for that meeting he must preserve his immaculate returning game and rap it up like he did himself, when Raonic left for a bathroom break duringtheir match.

Sniffles and a head cold will not force Federer to default.

Croatia’s Marin Cilic crushed the dreams of Luxembourg and Gilles Muller over five sets to meet Querry, both players in their first Wimbledon semifinals.

“The whole tournament I’ve been a little bit sore. But I tried my best right to the end. I’m proud about that,” said Murray.

“I’ll get the best advice I can, then stick with that. If it means taking a few weeks’ rest, then so be it. If it means training and doing the right rehab and stuff, then I’ll do that.

“I have no idea of exactly what that’s going to be. Now I’ll listen to my team and, you know, get the best advice I can, make a decision after that.”

Djokovic admitted that his injury was not his shoulder, which was treated on court on Tuesday, but the same concern that took him out of Miami.

“It’s not the shoulder. It’s the elbow that already keeps bothering for over a year and a half actually,” he said.

Like Murray the problem will send him on a voyage of discovery. With the US Open coming up at the end of August, time will be again the issue.

“It’s not a time and place for me to talk about the details,” said Djokovic. “I’m just going to talk with specialists, as I have done in the last year or so, try to figure out what’s the best way to treat it and to solve it, to find a longterm solution. Obviously shortterm it’s probably rest is most appropriate. We will see.”

Federer will offer some respite from the three remaining booming servers. But he must see the injuries to his main rivals as the draw inviting him forward up in a way he could have never foreseen.

The tournament has come down to one seven time Wimbledon champion and three players who have never won it.

“I think he’s the greatest of them all. It’s a great challenge to have the opportunity,” said Berdych about Federer.

The Swiss player may not have eased any anxieties in the mind of his opponent.

“This year I’m just a normal tennis player again where I can focus on tactics. I think that’s the difference,” said Federer alluding to his injuries..

Federer “a normal tennis player” – just another twist in a rollercoaster day at the championships.