John Kavanagh: ‘McGregor is not trying to win Wimbledon’ 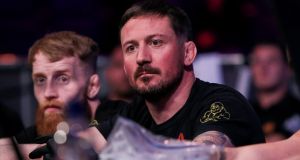 Conor McGregor’s coach John Kavanagh is confident he can spring a surprise in fight with Floyd Mayweather. Photo: Gary Carr/Inpho

McGregor, 28, has never boxed as an amateur or professional and has roundly been written off by experts who say he has no chance against Mayweather, but Kavanagh feels his man is already shaping up well.

Speaking at a press conference in Glasgow, where another of his UFC fighters Gunnar Nelson is set to face Santiago Ponzinibbio this Sunday, Kavanagh said: “He will be very well-prepared.

“We have gone through one training cycle and we had in some good sparring partners, and, as we expected, his skills transcended over.

“He is not trying to win Wimbledon. It’s not that different.

“There are some differences in this fight; he doesn’t have to worry about someone shooting on him. It’s been a great experience. The first half has gone very well and I am heading out to Vegas for the second half on Monday, and I am expecting him to peak at the right time.”

Boxing greats Mike Tyson, Freddie Roach and Amir Khan are among the big names who have already declared the contest a mismatch.

But Kavanagh laughed off Mayweather’s claims he would win even if he was taking on McGregor at his own MMA game.

“Stop lying,” he shot back. “We all know what would happen if it went into the octagon.”

Kavanagh will jet out to the United States on Monday to re-join McGregor’s camp after his duties with Nelson in Glasgow are complete.

In the meantime, he has been enjoying from afar the press tour that has so far seen McGregor prove himself more than a match for Mayweather when it comes to verbal jousts.

Mayweather was judged to have come out on top of the trash talk during Tuesday’s opening showdown in Los Angeles but McGregor hit back with a series of well-received blasts at Wednesday’s packed-out Toronto face-off.

They meet again on Thursday night in New York but McGregor’s coach was honest enough to admit he does not think Mayweather will be spooked by the Irishman’s sledging.

“If I am being 100 per cent honest I would say no,” replied the Straight Blast Gym guru when asked if McGregor was getting into his opponent’s head.

“Floyd is 40 years of age, he’s been around the fight game, I think the two of them are having a lot of fun with it. It is going to get better.”