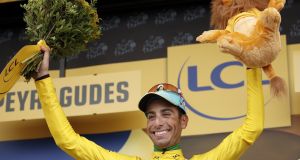 Against all expectations, 200m from the top of the airport runway used to shoot parts of the film Tomorrow Never Dies, the Tour de France saw Sky fall as a bike race erupted from a procession.

After seven days in the lead, Chris Froome cracked; for the first time, he lost the yellow jersey, leaving the Tour on a knife edge: Fabio Aru took over at the top of the overall standings but he has the Briton and the stage winner, Romain Bardet, breathing down his neck, and Rigoberto Uran, Daniel Martin, Simon Yates and Mikel Landa all within three minutes. Uran later received a 20sec penalty for taking a bottle from a spectator.

Martin’s finish means he moves up one place in the general classification to fifth, one minute and 41 seconds behind Aru.

There were even hints of tension among the Team Sky camp after the finish, with video footage showing what appeared to be an exchange of views between Landa and the directeur sportif, Nicolas Portal, who appeared on television afterwards to quash rumours of dissent over whether the Spaniard should have waited for Froome, or whether he should have been given his head.

For almost six hours it had been business as usual, with Sky controlling the race, setting a tempo calculated to discourage attacks, ruffled only by a brief excursion off road by Froome and Mikel Nieve, to no ill effect, at the foot of the Col de Peyresourde. Froome’s rivals will never know whether his team’s strategy was a bluff to conceal the fact their leader was not feeling his usual self; they may regret not testing the rider before the final seconds.

Aru began the final sort-out among an elite group of 10 which hit the 20% slopes of the runway together. He attacked up the left as if in slow motion, with Froome initially holding his wheel before slipping back.

That was the cue for the Italian to press harder, with Bardet biding his time before surging forward to take his third stage win in three years.

Behind, Froome was showing a face the Tour has not seen before: contorted, livid, with his legs clearly unable to obey his brain as the rest clawed their way past.

By the finish he had lost 22sec, which is a far from conclusive margin, but which represents a massive blow for a rider and a team who always function best on the front foot.

With its 100km and three first category climbs, Friday’s Bastille Day stage has always looked set to be intense, but now it can be expected to be utter chaos.

When it comes to controlling the race, Aru’s Astana team are without their strongest workhorse in Dario Cataldo, while Jakob Fuglsang has broken bones in his elbow and wrist, and was unable to hold the pace of the leaders.

Bardet wants the yellow jersey, “as soon as possible”, he said. Even if Froome has not quite recovered overnight, Sky have Landa and Nieve in ominous form. Uran’s Cannondale team are old hands when it comes to aggressive racing while Martin – albeit still suffering from back trouble after his crash en route to Chambery – and Yates will relish the cut and thrust.

“I expect many bouleversements, the organisers wanted a completely chaotic stage, and they should get one,” Bardet said. “Tomorrow will be really hard to control, as Astana have lost some strong riders recently. Team Sky will be the strongest so there will be a huge battle. I didn’t expect Froome to crack. I was prepared for him to attack on the Peyresourde.”

As well as Fuglsang, there were other notable absentees from the select lead group: Nairo Quintana and Alberto Contador, who both lost over 2min; Quintana’s challenge would appear to be over, but Contador might thrive if Friday is as chaotic as expected.

On the 50th anniversary of Tom Simpson’s death on Mont Ventoux, it would have been a little too neat if Steve Cummings had won the stage he is targeting. The British national road-race champion made a wholehearted attempt, infiltrating the early escape as the race left Pau in the rain, and attacking solo over the hors category Port de Balès, only to be scooped up 8km from the finish.

This was the kind of throw of the dice that “Major Tom” produced from time to time, and which won him hearts across Europe, however the dice – or he – fell. Cummings has several more chances to take the win Dimension Data deserve and given Simpson’s bid to win the 1967 Tour ended in failure, it was apposite, if unfortunate, there was no fairytale ending for another Briton half a century on to the day.