Roger Federer and Rafael Nadal on course for grand reunion 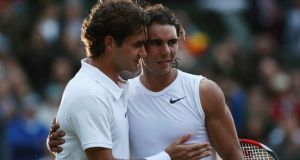 Nine years ago this week, Roger Federer and Rafael Nadal stepped on to Centre Court and played the final of all finals: a three-act epic across four hours and 48 minutes. It was, staggeringly, the last time the two greatest tennis players in history faced each other at Wimbledon.

Yet, in the late autumn of their careers, the prospect of their great trilogy of finals between 2006 and 2008 becoming a quadrilogy grows more tangible with each screaming forehand. According to the bookmakers, the 35-year-old Federer is favourite for his eighth Wimbledon title while Nadal, at 31, is right behind him. Not so long ago both men appeared to be tumbling towards retirement; now the headwinds are blowing them towards the grandest of reunions.

Their performances pass the eye test, too. Federer, while not yet hitting the highest notes at this Wimbledon, is still playing a damn good tune despite a heavy cold. Meanwhile, Nadal appears to be thrashing the ball more belligerently than ever after years of foot, knee and wrist injuries.

On Friday Tim Henman even claimed that Nadal’s backhand was the most improved shot in tennis but Federer also has serious claims on that award, given how much extra pep he now has coming over his own backhand. That shot used to be passive. But, as his victory in the Australian Open showed, it has been transformed into a vicious addition to his armoury.

Inevitably, as both men paddle deeper into the tournament, more thoughts will drift towards their 2008 classic. Back then Federer had won five successive titles at the All England Club and many believed he wore a cloak of invincibility on grass. Nadal had other ideas. At the time Federer’s fashion-sense seemed to be going through a Jay Gatsby phase; he came on court with a cream-coloured cardigan with gold buttons and a badge with RF emblazoned on it. Nadal, meanwhile, wore a sleeveless shirt with a thick bandana. It was perfectly set up: the aristocrat against the pirate.

In the first act Nadal went two sets up and had three break points to go ahead in the third. Then came a rain break during which Federer’s partner, Mirka Vavrinec, reminded him in no uncertain terms that he was “Roger Federer, five times champion”.

In the next act the Swiss player stormed back – including an epic fourth set tie-break of stupendous quality and excitement. After more rain came the final act, a bawdy cacophony of noise, tension and unbelievable tennis during which Nadal held his nerve amid the gloaming to win 9-7 in the fifth. And Federer lost more than his Wimbledon title that night. His No1 ranking, held for 237 consecutive weeks, also fell into Nadal’s grasp.

At this stage it seemed their rivalry would dominate Wimbledon for years. True, Novak Djokovic and Andy Murray were ranked three and four in the world by the end of 2008 but, in terms of talent and temperament, that gap still appeared vast.

Yet somehow it never happened. And when Federer lost against Sergiy Stakhovsky in the second round in 2013, slowed and stiffened by a back injury, it appeared that it never would. For Federer at 32 the jazz age appeared to have given way to old age. Nadal, too, was considered past it. Yet both men refused to go away.

Great rivalries often thrive on contrast and Federer and Nadal could not be more unlike each other. One is right-handed, the other a rightie-turned-leftie. One likes the quick kill, the other gives the impression they would happily grind out a point for hours. Federer comes across as debonair, while Nadal sees himself as a permanent underdog, riven by self-doubts even after 15 grand grand slam titles.

It goes on. The Swiss star barely sweats, while Nadal’s body gives the impression it is permanently in a Turkish sauna. Then there are the Spaniard’s numerous tics – the need for the ball boys and girls to bring him two towels, his relentless tugging of his shorts, the OCD-central touching of his body and face between points.

Yet when the pair have come together it has resulted in 37 compelling matches, 23 of them in Nadal’s favour – although Federer has won the past four. For there to be a 38th encounter at Wimbledon Nadal will probably have to see off the big-serving Gilles Müller, the big-serving Marin Cilic and Murray. Federer’s path is even tougher: first the former Queen’s Club winner Grigor Dimitrov, then probably Milos Raonic in the quarter-finals then Djokovic in the semi-finals.

There are other dangers lurking. Dominic Thiem has snuck into the last 16 but has been impressive and dangerous. Kevin Anderson’s serve looks indestructible. While on grass another ace-machine, such as Raonic, can always get hot.

Yet the fact that Federer and Nadal, tennis’s alpha and omega, are still leading the conversation is to be savoured – although not as much as the anticipation of seeing them together on Centre Court one last time.