Wimbledon: Coco keeps feet on ground ahead of biggest test 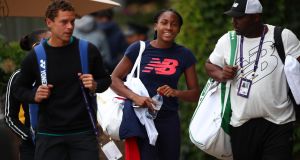 Coco Gauff will change nothing when she meets Simona Halep on court one on Monday. The 15-year-old’s first run in Wimbledon still has the tournament gasping and mildly terrified, a ball of energy radiating threat to almost everyone, even overshadowing Serena Williams who is ominously picking her way through the draw, improving and strengthening her game at each round.

Gauff, whose breezy off-court attitude can be both sweetly adolescent and precociously advanced, played a fun mixed doubles over the weekend with Britain’s Jay Clarke and lost.

But it hasn’t knocked her upbeat sense of fun or life and death seriousness on court. The vapour trail she left behind after the first week registered unusual levels of competitive emotional maturity. Off court she remains the teenager who will invest in Jaden Smith hoodies with her earnings but believes what her father told her when she was younger that “you can change the world with a racquet”.

After her doubles match on Saturday, Gauff was asked about Halep, a former French Open champion and world number one.

“I’ve never hit with her or anything or practised with her,” she said. “I don’t know how the ball would feel when I actually play. I think I’m just going to approach her like every other match I have been approaching. My routine has been working pretty well.”

What might be music to the Gauff team’s ears is not what Coco thinks or even what Halep said after she made it through by beating Victoria Azarenka in straight sets, but what Halep’s beaten opponent thought. Azarenka damned the baseliner with faint praise.

“Solid,” said Azarenka of Halep. “She didn’t do anything extraordinary, you know, but she was very solid. She kept being solid, taking everything that I was giving, and I gave her a lot.”

For those blinded by the adolescent charms of the younger player, it gives out hope that the American could find herself in a quarter-final. To meet Williams both would have to make it to the final.

A darling of social media and now on the radar of Michelle Obama and the mother of Beyoncé, Tina Knowles, Gauff’s week is becoming more packed with extraneous material day by day. When she was told that her mother’s chest-thumping celebration after her last match went viral, Gauff’s reaction was perfectly of her age and time.

“Oh no,” she said. “Please tell me she’s a meme.” Describing herself as “weird” and “goofy”, Gauff projects herself as an informed and reflective teenager taking a normal interest in a narrow band of teenage things but has a broad grasp of the world around her and her place in it. When she was asked if she believed in destiny her reply was anything but weird.

“I don’t really believe in fate and destiny,” she said. “I feel like you can kind of change your own world. Sometimes fate can always not be a good thing. Sometimes fate can be a bad thing. I try not to think of it as my destiny. I feel like if I do think about it like that, then my head’s going to get big.”

Halep gave a good impression of being the disinterested opponent. But she’s not. Far from a veteran at 27 she is 12 years older than Gauff and has been ranked world number one in singles on two separate occasions between 2017 and 2019. She reached the top ranking for the first time in October 2017 and on her second occasion held it for 48 consecutive weeks. It seems significantly more substantial than Azarenka’s summation of “solid”.

Williams, who meets 30-year-old Carla Suárez Navarro, exactly understands the teenage kicks which Gauff is currently living. Williams didn’t win a Grand Slam at 15 but the first of her 23 arrived at the US Open as a 17-year-old.

“I think there’s some 15-year-olds, like me, who wouldn’t know what to do at Wimbledon. Then you have a 15- year-old like Coco who knows what to do. It really depends,” said the 37-year-old. “I think she’s definitely on a different level, so I think she’s totally capable and ready, to be honest.”

The silent assassin has also ghosted into the second week. More attention today will fall on Ashleigh Barty, the current world number one, who meets American Alison Riske.

Unflappable and efficiently moving through the draw the Australian took 53 minutes to send Harriet Dart back to Hampstead. It was a difficult few days for the Briton, who was adroitly informed via text message by Clarke that he had decided to play doubles with Gauff rather than her.

A screengrab of that text could very easily become a meme.

1 Ireland v Scotland: Doris’ day as Caelan set for first cap
2 Six Nations: Pundits, journalists and players have their say
3 The Offload: Doris, Kelleher and Cooney to give Ireland a new look
4 Rafael Nadal keeps his cool as Nick Kyrgios goes out swinging
5 Sports Extra customers get every LaLiga match at no extra cost
Real news has value SUBSCRIBE