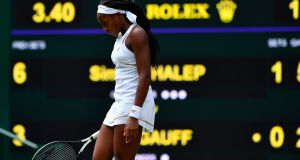 In the end it was a desultory shrug from Coco Gauff. A dreamlike run, a whirlwind at Wimbledon for the 15-year-old that hadn’t touched land for a week, then did as Simona Halep dutifully turned to the crowd and accepted a respectful applause, her 6-3, 6-3 win pulling the draw back into something resembling order.

The world number one Ashleigh Barty was another casualty of the fourth round but it was the gun slinging American kid who had captured public acclaim, Barty needing a run to the final or to win for the first time to underscore her number 1 ranking with the kind of world introduction Gauff had instantly acquired.

Gauff, ranked 313 in the world, seemed a little lost in the final throws of the match, swishing her racquet between points, the energy levels low and casting glances towards her mother Candi and father Coey in the player’s box.

She later complained of not feeling well, had taken a time out between the first and second sets and had a conversation with umpire James Keothavong on her return.

“ Yeah, I wasn’t feeling 100 per cent today. I still tried my best,” said the teenager. “To be honest, I don’t know, so have to figure that out,” she added when asked what was wrong. “I feel like I wasn’t tired today. I don’t know what I came with. Like I went to the doctor. I’m supposed to be coming back tomorrow to figure that out.

“But I don’t think I was tired because of the matches. I honestly think something must have just came in the past weekend.”

Although the youngster broke Halep’s serve twice in the match, she dropped serve five times. She also hit an extravagant 29 unforced errors, compared to just 14 for Halep, who took one hour and 15 minutes to win Monday’s match.

While the end of her enchanting run appeared to jerk Gauff back to stunned reality, a little of her gloss remained on Court One after seven straight matches, three in qualifying and four in the main draw. Her run ended a couple of wins short of 15-year-old Jennifer Capriati’s semi-final in 1991, where she lost to Gabriela Sabatini 6-4, 6-4.

Gauff’s opening set the tone for a match never in her control. Three forehand errors in the first game handed Halep her serve and although she broke back, her consistency levels were uncomfortably out of sight.

Halep took a 5-3 lead and went up 0-40 on the Gauff serve, the 27-year-old passing the teen at the net for 6-3. It was icy Halep looking the woman in control, Gauff trying to learn as she went; a fraught schoolgirl twirling her racquet, Halep dancing on her toes.

An early exchange of service breaks in the second set was enough for Halep to step up, Gauff hitting a backhand wide at break point to trail 4-2. The teenager’s head was down. An impetuous forehand into the net and an ace from Halep helped her to 5-2 and there was no way back.

While Gauff held serve to extend the match by a game, the crowd’s groans and sighs musically scored the final points, the gritty reality of a beaten 15-year-old fleetingly turning to melodrama. But there was an a hint of upside in next year’s promise.

With Barty gone it’s all American with Alison Riske and Serena Williams meeting in the quarterfinal. Williams is as she always has been. Not unlike the new film ‘Midsommar’, which crackles with terror and cleverly exploits a plot where fear is not what’s in the dark and lurking but what’s in broad daylight. It profits from a perceived sense of exposure to the danger.

The buzzing sound early in the day was a chainsaw. Sticking with the horror Serena did what she had done six times previously to Canary Islander, Carla Suarez Navarro in 64 minutes with Navarro taking only two games in each of the sets.

Riske will feel the oppressive force of Williams, who the Brits fully hope will face their charging hope Johanna Konta, who overcame medical attention to her foot and former winner Petra Kvitova 4-6, 6-2, 6-4 to claim a quarterfinal place.

Williams did not disabuse anyone of the notion she is the person for all others to be fearful. She is the one who will expose her opponent to things that should cause concern. She started the first week tentative and not knowing how her problematic knee would stand up. On Monday she was pleased with her body and laid down the law.

“It’s just good that I’m not in pain,” she added. “Doing three hours of treatment after every practice, every match. That’s a victory in itself, to know that I’m feeling better no matter what. I’m on the right path. I finally found the solution. I can be strong for the rest of the year.”

Maybe time to be afraid.