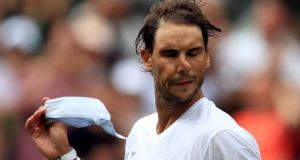 Rafa Nadal set the tone early in the day. Maybe it was the sight of Spanish golfer Sergio Garcia’s name on the guest list for the Royal Box, or, maybe lingering resentment over the All England Club seeding him three and putting him on a schedule to meet Roger Federer at the semi-final stage was what fired his left arm.

The rule of thumb governing the top seeds, especially the current top seeds, who glower down on the rest of the draw like Mount Rushmore figures, is to make it through the first week any way possible and a naturally occurring algorithm takes over.

In short it is that the cartel have made their critical adjustments in the three first-week matches and meet players whose experience of playing the second week of a Grand Slam is comparatively lightweight.

Their advantage exponentially increases and the score lines on Monday showed not just straight set wins but a similar trend with Nadal, Federer and Novak Djokovic all romping home.

But Nadal was dismissive of any idea that the three are sending out a message to the rest of the draw, a suggestion put out by BBC analyst and former championship winner Boris Becker.

His head is buried in trying to figure out the next match, which will be Sam Querrey, a semi-finalist in 2017, who edged out another unseeded American, Tennys Sandgren, 6-4 6-7 7-6 7-6.

“I know they’re good. I know there’s going to be a day that they going to be in front of us because they will play better than us or because we are leaving. We are not kids any more. That’s all. Of course, is special what we achieved in the last 15 years. Something special, difficult to repeat I think, so many titles between three.”

Djokovic’s pedigree blinded his opponent, outclassing Humbert on the Frenchman’s maiden appearance in the second week of a Grand Slam.

The 15-time champion Djokovic broke early in the opening two sets to take control, needing marginally longer to earn the break in the third, before dismissing his younger opponent.

The top seed remarkably dropped just 14 points on serve and took five of nine break points to set up a meeting with Belgium’s 21st seed David Goffin in the last eight. Djokovic has lost just one set so far against Poland’s Hubert Hurkacz. Why he was asked.

“I have no explanation for that. I leave it to your creative spirit to understand why. The experience we have helps confidence, everything we have achieved we carry onto the court and players feel that, feel pressure,” said Djokovic, who has reached his 11th Wimbledon quarter-final.

It was Federer’s 16th time in the Wimbledon fourth round and he faced Matteo Berrettini, who had at one time not so long ago held the Swiss up as his childhood hero. But Federer charitably finished him off quickly, allowing the 23-year-old just five games over three sets.

It was Federer who kept the fans in Centre Court in the evening match. They quickly knew what was taking place when Berrettini unconvincingly opened with 17 minutes of jangling nerves. In that time the eight times Wimbledon winner allowed him one game.

The Italian, seeded 17, took two games off his idol in the second set, which then quickly took the shape of an evening procession, probably mystical for some with the near deity Federer easily defusing the booming serve of the 6’5’’ player across the net.

At the end Federer showed his continued professional courtesy of being ruthless, Berrettini taking two games in the final set and Federer wrapping it all up in 74 minutes for his record extending 17th Wimbledon quarterfinal.

1 England 24 Ireland 12: How the Irish players rated at Twickenham
2 Eddie Jones’s comments have already provided Irish team-talk for 2021
3 Ireland suffer Twickenham torture yet again as England dominate
4 TV View: Sunday Bloody Sunday . . . Not Bono’s fault but Boy, that was Bad
5 England held all the aces in defining battle of the breakdown
Real news has value SUBSCRIBE