Rest of field yet to pose real threat to champion trio of Federer, Nadal and Djokovic 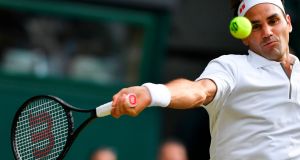 He has become a Frankenstein of tranquillity, a monster of patience. It’s time to talk about Roger.

Federer’s third-round victory over Lucas Pouille made him the first man to chalk up 350 wins at Grand Slams.

It means nothing to the eight-times winner . . . well, something, but not just in the middle of the tournament. That was the gist of the thinking of Federer, who has slipped into a kind of a cruise control.

His history and also that of Rafa Nadal and Novak Djokovic ensures the first week of the cartel at Grand Slams is treated in an almost cavalier manner. It’s entirely presumptive that they will make it through to the second week.

Federer’s win on Saturday over Pouille seemed almost a demonstration of restraint and while 7-5, 6-2, 7-6 suggests some struggle in the two sets bookending the score line, struggle for Federer is a relative term. It all seemed like his first two matches, a light wash watercolour.

Nadal was equally smooth through the gears. Jo-Wilfried Tsonga, formerly a world number five, was expected to at least shake the Spaniard up a little but 6-2, 6-3, 6-2 against the Frenchman sent an alarm bell flashing in the locker room.

Probably the most appropriate if somewhat cruel comment was made during the middle of Nadal’s bag of winners. It was directed at Tsonga in the closing stages when the credits were beginning to roll.

“It’s not your fault. He’s too good,” screamed a spectator. Tsonga was aware enough to smile through gritted teeth at the fan. When he held serve to take the match to another game the crowd took to their feet in mock jubilation.

The neurotic, meticulous Nadal, who continues to fascinate by carefully turning his bottles with the labels all facing out, may even have surprised himself about finding such a rhythm underpinning his natural power.

He made 69 per cent of first serves and prevented Tsonga from earning a single break point. He would also have been aware that Tsonga was one of the players t 10 years ago that had been earmarked to become part of the elite order.

It’s impossible to say that the time has now passed for the 34-year-old, who was talented enough to make an Australian Open final in 2008 as well as multiple French Open and Wimbledon semi-finals. But he is one of the many pretenders who have fallen along the wayside and not even one of the modern crew.

With 37-year-old Federer continuing to craft his tennis career almost ridiculously like that of a golf career, two very chilled titans of the game have emerged from last week.

“I’m very happy how it’s going so far. I thought it was a good match with Lucas,” said Federer. “Of course, I hope it’s going to take a special performance from somebody to stop me, not just a mediocre performance.

“I’m happy that I’m able to raise my level of play. Also there was a great run of games midway through the second after winning the first. I like seeing moments like that in a match for me.”

Djokovic was less dominant but withstood fierce pressure from Hubert Hurkacz to give him a shot at 21-year-old French player Ugo Humbert, a lefty ranked 66 in the world. The reality is the three are the ones asking the questions. It should have been the other way around.

Humbert, Matteo Berrettini and Joao Sousa have set up meetings that other hopefuls last week could not, while others such as Canadian Milos Raonic, Japan’s Kei Nishikori and heavy-serving Sam Querrey wait in the wings hoping for an off day from one of the trio.

“The panic can set in quickly on this surface. I don’t know if that’s got something to do [with it], and if age calms the nerves there. I’m not sure,” said Federer. “I think also it’s maybe a moment in time.

“We know how hard it is to beat Novak, how hard it is to beat Rafa here. Me, as well. I have a great record here,” he added needlessly. “We obviously also have better draws because we’re seeded, and we’re away from the bigger seeds earlier. Our path to the fourth round is definitely not as hard as maybe some of the younger guys on the tour.”

San Franciscan-born Querrey made the Wimbledon semi-final in 2017. Nishikori made the US Open final in 2014. David Goffin is poised and ready to face Djokovic if the two win. The Belgian has never made it past a Grand Slam quarter-final and to meet Djokovic he has to beat 35-year-old Fernando Verdasco, who made the semi-final of the Australian Open nine years ago.

Raonic has been to a few semi-finals but not since his run to the final here in 2016. Then there’s Tennys Sandgren, still in the draw but whose best Grand Slam run was to the quarter-finals in Melbourne last year.

“I’m expecting a tough one,” said Federer of his next opponent, 23-year-old Italian Berrettini. “I hope he has no energy left after today [his previous five-set match against Diego Schwartzman took four hours 19 minutes]. I’m sure he’ll recover. He’s young.”

There are more players over the age of 30 than under in the fourth round for the first time in the Open era. Young hasn’t worked yet. Federer knows it.