Bernal is the sharpest of Team Ineos’s dual leaders, reaching the uphill finish ahead of Thomas 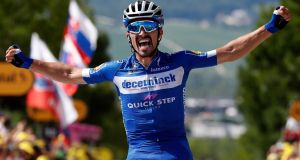 Julian Alaphilippe, the Tour de France’s king of the mountains last year, was reduced to tears in Épernay after a fizzing attack through the champagne vineyards brought victory in stage three and the yellow jersey. It was the 27-year-old Frenchman’s third Tour stage win, after his two victories in 2018, but his first overall leader’s jersey.

“I’m speechless,” the 2018 Tour of Britain winner said. “I knew this stage suited me. I managed to avoid any pitfalls and crashes. I felt good so I accelerated on the Cote de Mutigny climb, but I didn’t think I’d go alone.”

So well suited was the stage finale to Alaphilippe’s punchy attacking style that almost every sports director in the start town of Binche had cited him as a pre-race favourite. “Maybe he designed today’s course,” said Matt White of the Mitchelton-Scott team. “If you could design a course for Alaphilippe, today’s the day.”

Alaphilippe’s Belgian team Deceuninck-Quick Step missed out on home success during the weekend’s Grand Depart, but despite his growing list of wins and a steady weight loss in the past year or so, Alaphilippe is not yet seen as an overall contender in the biggest mountain climbs.

As Alaphilippe celebrated his win, Egan Bernal proved the sharpest of Team Ineos’s dual leaders, reaching the uphill finish ahead of Geraint Thomas and easing five seconds clear of the Welshman in the overall standings.

“I wasn’t dancing up the climbs, but it was okay,” Thomas said. “Obviously there were still bonus seconds up for grabs but you could see guys like Alaphilippe going and you just leave it to them and get through as best as possible.

“Short steep climbs aren’t necessarily what I love, but I think we rode well as a team, we were always in good position and communicating really well.”

The feeling persists it will be Bernal, rather than Thomas, who emerges as the British team’s leader once the highest climbs come into view.

The Belgian Tim Wellens had taken the stage by the scruff of the neck inside the last 50km, with a solo attack from the day’s breakaway, building a lead that was steadily eroded as the peloton chased him over the short, sharp climbs overlooking Épernay.

But his efforts were dwarfed by Alaphilippe’s typically barnstorming move that took him clear of Wellens and the pursuing peloton in the final 15km. “It’s difficult to meet the expectations of being the favourite,” Alaphilippe said, “but I made it. I’m delighted.”

If Thomas, Bernal and their teammates had laid down the gauntlet as the general classification team to beat in Sunday’s team time trial, Adam Yates’ Mitchelton Scott team remained in bullish mood, despite his brother Simon’s time loss.

“I’m here [riding]for Adam and that’s it,” Simon Yates, the winner of the 2018 Vuelta, explained before dispelling once and for all the rumour that he was, like his brother, also targeting a high overall finish. “I’ll do what I can to support the team.”

White, the team’s sports director, rolled his eyes when asked if Adam Yates had started the Tour as a decoy for his Grand Tour-winning brother. “Nobody is going to believe our plan until it happens. We’re not lying. We’re not playing any games.

“Simon’s here for the tailend of the race. We could have easily got him to the finish of the team time trial on Sunday without losing any time but that wasn’t the way to get the most out of our team.”

White added that the result of Sunday’s team time trial revealed that the margins in performance between the Tour’s top teams are becoming tighter.

“People are getting closer and closer. Take Jumbo-Visma out of the equation – that was an incredible ride – but between Ineos, over the next 13 or 14 places there is 20-30 seconds, so the level of all the teams has gone up. What you can read into that is that gap between the best teams in the Tour is getting smaller.”– Guardian

1 Keith Duggan: Through the glories and the disgraces, we were all Maradona addicts
2 GAA Statistics: Can Cavan and Thomas Galligan beat Dublin with the long kickout?
3 Rugby Stats: Blame game at lineout time is on the whole team
4 Andy Farrell to delve deeper into Irish squad for team to play Georgia
5 All bets are on as America opens the gambling sluice gates and the dollars flow
Real news has value SUBSCRIBE