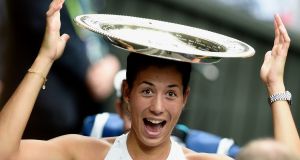 Garbine Muguruza of Spain celebrates with her trophy after defeating Venus Williams 7-5 6-0 to win the women’s singles title at Wimbledon. Photograph: Gerry Penny/EPA

The post-match press conference was of the type in which Venus Williams has come to specialise. The questions were considerably longer than the answers as the five-times champion studiously avoided elaborating in any meaningful way on her stunning second set collapse against Garbine Muguruza.

Her autoimmune disease Sjogren’s seemed the most obvious reason her energy levels sapped allowing Muguruza to inflict the first 6-0 scoreline on the 37-year-old in her 20-year Wimbledon history.

The last player to go down 6-0 in the second set of a Wimbledon final was Eugenie Buchard in 2014 against Petra Kvitova and prior to that Belgian Justine Henin lost the third set of the 2001 final 6-0, Venus Williams dishing out that thrashing.

But no other player in the Open era aside from Henin, Bouchard and now Williams has lost the final set of a women’s Wimbledon final 6-0.

Williams has always worked to the motto ‘if you’re hurt you don’t play and if you play you’re not hurt’. When asked about it her answer deflected to Muguruza.

“She played really well. I mean she played top tennis. I just have to give her credit for just playing a better match,” said Williams.

And there that mystery it will sit as the statuesque Venezuelan-born Spanish player leaves with her second Grand Slam trophy, claiming the Wimbledon trophy 7-6, 6-0.

The win came to Muguruza with words from the lips of Serena Wiiliams, sister of Venus, still ringing in her ears from two years ago.

Serena defeated Muguruza to win the 2015 Wimbledon final and the American turned to her teary 21-year-old Spanish opponent with a knowing smile.

“Don’t be sad. You’ll be holding this trophy very, very soon; believe me,” said Serena. The greatest woman player could see something in the Spaniard’s game then. It was on view for the world to see on Saturday.

A perfectionist by nature Muguruza launched herself last year with her win over Serena at the French Open. But following that frustration and an inability to live up to her billing she struggled and didn’t reach any tournament final until now.

“Yeah, it’s not easy,” said Muguruza. “It’s very good when you win it and it’s hard after when you come back and you know you have to defend it. But that’s a good position to have.”

Puncturing the dream for Williams to become the oldest player to win a Wimbledon title since Charlotte Sterry clipped her racquet to her bike 109 years ago and cycled from Ealing to the All England club, Muguruza won the match in the first set.

No one heard Williams snap but when Muguruza came from two set points down in the 10th game of the match Williams’ race was run.

In hindsight Muguruza played well when she needed it most. She fought off the first of the two set points at 4-5, 15-40 by winning a 20-stroke baseline rally, an exchange in which one of her forehands struck the net cord before landing deep in Williams’ half of the court.

She then attacked Williams on serve in the next game and earned two set points of her own with Williams hitting long on the second for 5-6 In the changeover Muguruza had time to consider her position of serving for the set. There were little signs of nerves but once in the rally, she dominated, Williams netting a backhand to hand over the set 7-5.

“At the beginning you know I didn’t like grass,” said Muguruza. “For sure I suffered to play and handle it. It took me a while to calm down, to say ‘hey it’s grass you have to adapt to the surface.”

The match statistics said Williams hit 25 unforced errors and 28 forced errors, or 53 points to just 17 winners, which illustrated as much what a sensational defensive game the Spaniard brought to the match as Williams’ profligate streak.

William’s has, in her own idiosyncratic way let it be known that whatever happened to allow her be crushed 6-0 in 26 minutes will remain with her and her sister and in that there is dignity and respect for Muguruza’s achievement.

The Spaniard has taken off. Again. For the Williams’ sisters, next year will be Venus at 38-years-old and 36-year-old Serena, a post pregnant mother. Nothing changes and everything does.