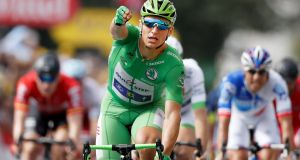 Germany’s Marcel Kittel, wearing the best sprinter’s green jersey, celebrates as he crosses the finish line during the 11th stage of the 104th edition of the Tour de France between Eymet and Pau. Photo: Lionel Bonaventure/Getty Images

Marcel Kittel is unfailingly modest but steamrollers are not known for beating their chests either. After winning half of the 10 the road race stages in the Tour since the race left Dusseldorf on July 2, the German is rewriting the record books. To find another cyclist so dominant at this early point in the race, it is necessary to go back to 1909 when five of the first six stages were won by the Luxembourgeois Francois Faber, the dominant rider of his generation, whose life and career ended on the Western Front.

Like Mark Cavendish in his pomp, Kittel is writing history in his own way. What made Cavendish unique was his ability to achieve a high rate of stage wins year in, year out, between 2008 and 2012. Kittel’s achievement in this Tour is a one-off, one to compare with other great winning streaks of the past: Mario Cipollini’s four Tour stages in a row in 1999, or Freddy Maertens’s five road stages in both 1976 and 1981, although in 1976 Maertens added three time trials to that.

There have been six flat sprint finishes in this Tour so far, and only one has eluded Kittel. The other fastmen are looking increasingly resigned although here, at least, the young Briton Dan McLay posted his best finish of the race so far with fifth place. Having led out the sprint in Bergerac, the Fortuneo-Oscaro rider opted to remain in the shelter this time, but he was little nearer to Kittel, reflecting the reality that all the sprinters are scrabbling for whatever crumbs the German drops their way.

Here, the German could afford the luxury of being able to start his sprint from 10th place, on paper way too far back. Sprinters at this level of superiority - be it Cavendish, Cipollini or others names from the past such as Jean-Paul Van Poppel - seem to operate in a different plane of time and space, seemingly able to select which wheel to slot onto: Michael Matthews was Wednesday’s victim. The Australian was following Edvard Boasson-Hagen, who led the gallop out, only for Kittel to come sailing past like a clipper overhauling a sailing dinghy, with the Dutchman Dylan Groenewegen coming up fast on his left.

It is one of the paradoxes of this year’s race that in the first year that every stage has been covered live on television from start to finish, half a dozen so far have been formulaic sprint stages.

The entire field know what awaits on Thursday, with the first heavy-duty summit finish of the race at the Peyragudes ski station, close to the summit of one of the Tour’s oldest climbs, the Col de Peyresourde.