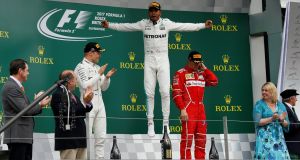 Lewis Hamilton delivered exactly what an ecstatic home crowd had demanded with a masterclass at the British Grand Prix, leading from pole to flag, untroubled out front by his rivals. Late drama for Ferrari when they endured punctures at the death cost the Scuderia hugely. Ferrari’s Kimi Raikkonen was in third and Hamilton’s title rival Sebastian Vettel could manage only seventh after his tyre disintegrated on the penultimate lap. Hamilton’s team-mate Valtteri Bottas put in a very strong run to come from ninth on the grid to second. Crucially Hamilton has now closed the deficit to Vettel in the Formula One world championship to just one point – a 19-point swing.

Having already matched Jim Clark’s record of five poles at the British Grand Prix, Hamilton has now also equalled Clark and Alain Prost’s record of five wins at the race. His qualifying lap was half a second quicker than both the Ferraris, the largest advantage in the single lap discipline any driver has enjoyed this season and they proved unable to match him on the Sunday.

His mastery of Silverstone in the Mercedes of the turbo-hybrid era is now unmatched. This is his fourth consecutive British Grand Prix win, again matching Clark’s record and he has converted pole position to victory in the last three races here. “Fantastic job all weekend guys,” he said. “So happy for everyone.”

It is the three-time world champion’s fourth win of the season, putting him one ahead of Vettel. His 57th career victory has narrowed the gap in the drivers’ championship standings to almost nothing and after difficult races at Baku and Austria he has come back with a dominant performance that is an absolute statement of intent.

Hamilton had got away cleanly from the start but Vettel, who’s brakes had been smoking on the grid, dropped a place to the Red Bull of Max Verstappen, and although they went wheel to wheel over the opening lap Verstappen held the pace by the end of the first lap.

The safety car deployed after Daniil Kvyat took out his Toro Rosso team-mate Carlos Sainz on the opening lap at Becketts but Hamilton nailed the restart three laps later and maintained the lead. Vettel however did not have the pace to pass a competitive Verstappen, which was to prove costly, with the Dutch driver almost a second a lap slower than Hamilton.

Hamilton had a two-second over Raikkonen by lead by lap six and Vettel was 5.3 seconds back, the British driver able to maximise his advantage in the clean air out front. On lap 13 Vettel made a concerted effort to clear Verstappen but although the pair went two abreast through Stowe, a punchy Verstappen would not surrender and held the place though Club to the delight of the crowd. “He wants to play bumper cars or something,” Verstappen said.

Vettel pitted early, on lap 19, to attempt the undercut taking the soft rubber, Verstappen covered the move a lap later but a slow stop cost him and he emerged behind the German. But Vettel was already over 15 seconds back from Hamilton and the early stop put the strain on his rubber that was to prove so costly later in the race.

Hamilton pitted on lap 25, a routine stop and he emerged still leading the race, just in front of his team-mate who hard started the race on the harder rubber. He could not be caught. The gap to Raikkonen was 13 seconds by lap 39 and Hamilton was controlling the race with ease. Behind him his team-mate had taken the faster supersoft rubber on lap 32 and proceeded to chase down Vettel, they vied with one another for two laps and the Finn made it stick by lap 44 on the way into Chapel.

It looked set to the finish but with two laps to go, Raikkonen took a left front tyre failure and a lap later Vettel’s front left also had a puncture. He had been complaining of blistering for some time. Both Ferraris had to pit again and the late drama promoted Bottas to second and as Hamilton serenely took the flag Vettel was doing his best to make it to the finish.

Verstappen ultimately claimed fourth and his team-mate Daniel Ricciardo had a 15-place grid penalty for taking a new gearbox and for replacing the MGU-H turbo which failed during qualifying and he fought back remarkably well to claim fifth place from 19th on the grid.

Fernando Alonso took a 30-place gird penalty for taking replacement power unit components and having started from the back of the grid he retired after yet again losing power on lap 34.

Renault’s Nico Hülkenberg took sixth place and his team-mate Britain’s Jolyon Palmer endured a brake problem on the formation lap and he lost hydraulics. Renault retired him at the side of the track before the race began, causing the start to be aborted. The Force India cars of Esteban Ocon and Sergio Pérez were in eighth and ninth with Felipe Massa’s Williams taking 10th.

1 Ken Early: Handball ‘crisis’ a timely distraction from the grim bigger picture
2 The Offload: Springbok heavyweights heading for Pro14
3 All Blacks facing a Christmas in quarantine
4 All in the Game: No sympathy from Bruno Fernandes
5 Malachy Clerkin: Nothing compares to rich tapestry of sound offered up by GAA match
Real news has value SUBSCRIBE

Colin Keane has Shane Foley in his sights as they head for Cork 15:52
Dermot Weld’s Tarnawa won’t be aimed at the Arc 15:47
All Blacks facing a Christmas in quarantine 15:33
World champions South Africa could miss Rugby Championship 15:27
Benfica announce transfer of Ruben Dias to Manchester City 13:48
Here is your handy guide to sport on television this week