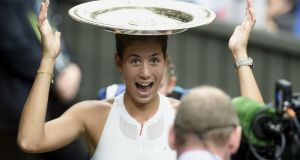 Centre Court isn't always the dream factory. Venus Williams, hoping to become one of the oldest players to win the Wimbledon title, in the end fell meekly to Spaniard Garbine Muguruza 7-5, 6-0.

A second set of destruction from Muguruza saw her rip through the powerful Williams game, breaking her serve three times and holding her own for her first Wimbledon title and second career Grand Slam.

Muguruza did to Williams what the 37-year-old had done to so many opponents in the past on Centre Court. While the first set was knife edge and took 51 minutes to complete, the second drastically fell away over 26 minutes as Williams’ unforced errors mounted.

In that unravelling, the story was as much about Williams’ unusual capitulation in the second set as much as Muguruza’s first win.

The Spanish player, ranked 15 in the world to Williams 11, showed some nerves in the opening games – a double fault on her first to an ace from Williams on hers was construed by some worried Spanish fans as an ominous start.

But it was Muguruza who lasted the longer rallies better with the 37-year-old Williams trying to keep the points short. In that scenario the Spaniard, winner at Roland Garros last year where long baseline rallies are everything, lasted the much better of the pair.

Williams forehand broke down several times in the latter stages of the set but still managed to press her opponent in the 10th game.

But Muguruza out-rallied Williams to save the first and served big for the second to save serve. Then, instantly responding in the next game it was Williams under pressure and down two set points.

The American saved the first but again she broke down in the extended rally, this time her backhand finding the net. The break was all that was going to separate the big hitting pair and Muguruza sat down at the changeover to contemplate serving for the set.

Earning two break points the 23-year-old took control before another extended rally ended with Williams ball in the net.

There were too many errors coming from the older player and Muguruza kept the ball in play, easily able for the hard hitting running match.

Then Williams fatally lapsed in the first game of the second set. With advantage to Muguruza, Williams dispiritingly double faulted to hand her service game over.

From there it was a slow motion disintegration of the five-time Wimbledon champion. The body language changed and the hitting became even more erratic as the crowd witnessed a once great champion in distress.

Muguruza then served for 2-0 and within four games she had moved from being stretched on Centre Court to controlling the match.

Williams lost her serve in the third game and with the double break and 3-0 up, there was no way back.

Muguruza at six feet tall to Williams 6’1’’ had the physicality to match her opponent’s feared poundage but she had the legs and mobility too.

It isn’t very often Williams has had to face an opponent who can handle her power and match it but that’s what Muguruza did.

Gaining confidence with every rally that went her way, she raced to 4-0, Williams fading in the rear view mirror.

In the fifth game of the second set Williams hit her 23rd unforced error but the scene was set.

Muguruza finally served for t he match at 5-0 up, a Hawkeye determination on the final point that Williams had again hit long.