US Open: Nick Kyrgios through after umpire’s intervention 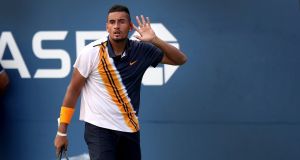 Nick Kyrgios will play Roger Federer in the third round of the US Open after he beat Pierre-Hugues Herbert in four sets. Photograph: Rick Loomis/The New York Times

Nick Kyrgios was saved from himself and from possible expulsion from the US Open on day four when the respected chair umpire, Mohamed Lahyani, broke with convention to comfort and warn the emotional young Australian about tanking during his second-round match against Pierre-Hugues Herbert.

Kyrgios, a set and 0-3 down when he let two big serves from the Frenchman pass him by without reply, recovered from what looked like an emotional and physical meltdown after Lahyani’s intervention to win in killing afternoon heat in two hours and 47 minutes on Court 17. After reviewing the footage after the match, Herbert released a statement condemning both the umpire’s actions and the United States Tennis Association.

The 4-6, 7-6 (6), 6-3, 6-0 win earned him a third-round match against Roger Federer on Saturday night, and the New York fans will no doubt give the self-proclaimed pantomime villain of the game the benefit of their wisdom in the cauldron of Arthur Ashe Stadium, when the temperature will have cooled but not the atmosphere.

Lahyani, one of the most experienced and respected officials in the game, is still under review by the USTA, but the tournament referee, Brian Earley, appeared to publicly exonerate him.

The umpire, Earley said, “came out of the chair because of the noise level in the stadium during the changeover, to make sure he could communicate effectively with Kyrgios. [HE]was concerned that Kyrgios might need medical attention. Lahyani told Kyrgios that, if he was feeling ill, the tournament could provide medical help. He also informed Kyrgios that if his seeming lack of interest in the match continued, as the chair umpire, he would need to take action.”

Federer, the sainted hero of millions, will have the overwhelming support of the crowd in what should be a charged environment on the show court on Saturday night. He beat Benoît Paire 7-5, 6-4, 6-4 to cruise through the second round in just under two hours, and said later: “It’s not the umpire’s role to go down from the chair. I get what he was trying to do. But you don’t go and speak like that. He was there for too long. It’s a conversation. Conversations can change your mindset.”

Kyrgios – who cemented a friendship with Federer at the Laver Cup this year after early frostiness – went into head-shaking, eye-rolling denial, downplaying the incident as trivial, and laughing at media questions about the propriety of an official seeming to show favouritism.

“He said he liked me,” the player said, smiling. “I’m not sure if that was encouragement. He just said that it’s not a good look. I wasn’t feeling good. I know what I was doing out there wasn’t good. I wasn’t really listening to him, but I knew it wasn’t a good look.”

He then turned on a persistent inquisitor who asked if it might have been perceived as “coaching”.

Kyrgios took the salt tablets at the next changeover, trailing 1-4, before coming from 2-5 to win the set in the tie-break. From that point on, he dominated Herbert, and took the fourth and final set 6-0.

Herbert, a doubles specialist with excellent skills, had no answer to the rejuvenated Kyrgios and later released a statement in which he said he was “angry against the umpire” and upset with Earley’s statement on behalf of the USTA.

“First of all I did not hear the discussion between Lahyani and Nick and it did not affect me at all,” began Herbert. “Nick from his side is not to blame as he did not ask for anything. But his behavior and motivation on court changed from this moment and then dominated the match.

“On the other hand after seeing the video I am angry against the umpire. He should not go down of [SIC]his chair and try to reason Nick. Did this action affect the game? We will never know.

“I am even more upset against the statement of the USTA that is clearly taking us for fools … when we players are making mistakes on court we are sanctioned.”