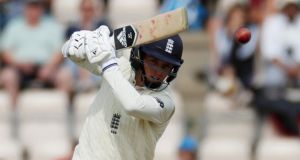 Sam Curran in action for England during the fourth Test against India at Ageas Bowl, West End. Photograph: Paul Childs/Reuters

Sam Curran’s 78 helped England recover from 86 for six to 246 all out against India on the first day of the fourth Test on Thursday after the tourists’ pace attack proved too good for their top order at the Ageas Bowl.

The total may still prove to be well short of what was needed to prevent India taking a strong first-innings lead but Curran at least restored some respectability for the hosts after a dreadful morning session.

England captain Joe Root won the toss and elected to bat in glorious sunshine and with a track that looked nicely prepared for batting.

England lead the five-Test series 2-1 but were outplayed in the third Test at Trent Bridge and once again the tourists’ bowling attack combined aggression, movement and consistency as they removed the top order cheaply.

Jasprit Bumrah continued where he left off at Trent Bridge, getting the early breakthrough in the third over with an unexpected delivery bamboozling Keaton Jennings.

Bumrah produced a rare inswing to the left-hander which struck Jennings, who had opted to leave the ball, on the pads and the England opener was removed without scoring.

Root was also trapped lbw by Ishant Sharma with a full length ball which moved in late.

England’s gamble to include Jonny Bairstow as a specialist batsman even though the regular wicketkeeper is nursing a fractured finger on his left hand also backfired. Batting on six, Bairstow edged another fine delivery from Bumrah to keeper Rishabh Pant as England floundered on 28 for three.

Alastair Cook made 17 before an attempted late cut off Hardik Pandya flew to skipper Virat Kohli who pocketed the chance at third slip. His 55-ball knock included three boundaries.

The only blemish in an otherwise perfect session from India came when Jos Buttler was dropped on 11 when he edged the ball to offer a low catch to Pant off Mohammed Shami.

Shami did get Buttler (21) after lunch, however, Kohli snapping up a catch at third slip, and the Indian paceman removed the dangerous Stokes (23) lbw.

Mooen Ali and Curran put on an 81-run partnership for the seventh wicket before the recalled Ali was removed by Ravichandran Ashwin for 40.

After Adil Rashid was trapped leg before by Sharma, Stuart Broad provided valuable support for Curran with 17 in a 63-run partnership that pushed England towards a total that had looked very unlikely earlier in the day.

India’s opening pair of KL Rahul and Shikhar Dhawan got through four overs without trouble ending the day on 19 without loss.

India had named an unchanged team while for England, batsman Ollie Pope was left out and seamer Chris Woakes was missing with a thigh injury.

Bairstow’s finger injury meant he was ruled out of wicketkeeping duties for the fourth test. Buttler took over behind the stumps.