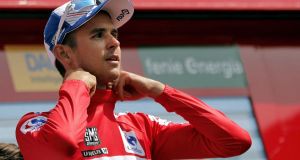 Education First-Drapac’s Clarke beat Trek-Segafredo’s Bauke Mollema and BMC’s Alessandro De Marchi in a three-man sprint at the end of the 188.7km stage from Granada to Roquetas de Mar.

They had been part of a 25-man breakaway which also included Groupama-FDJ’s Molard, who came home in a second group just eight seconds behind.

With the main peloton, including Kwiatkowski, not crossing the line for another four minutes and 47 seconds, Molard goes into the red jersey by 61 seconds from the Polish rider.

It was the second straight day stage honours had gone to the breakaway following Ben King’s victory on stage four, but where the Dimension Data rider fell short of taking red from Kwiatkowski 24 hours earlier, Molard succeeded this time.

There was plenty of climbing on the day but the stage would be defined by the long descent to the finish. It was there Clarke, Mollema and De Marchi broke clear while Molard joined Davide Villella (Astana) and Floris De Tier (LottoNL) in a counter-attack.

Team Sky did initially chase in defence of the red jersey but it was clear as they reached the foot of the descent they were content for Molard to take it as they focused on marking the other general classification hopefuls.

It was a second Vuelta stage win for the 33-year-old Clarke, with the other coming back in 2012.

“It’s just amazing,” he said. “I’ve worked so hard since I last won a stage here and I just couldn’t repeat it. It’s taken me so long to get back there and have my stars aligned. Even today I wasn’t sure it was possible.

Both Nicolas Roche (BMC Racing Team) and Dan Martin (UAE Team Emirates) finished in the main bunch, which rolled in three minutes and 52 seconds behind Clarke. The time gained by the 15 riders who were ahead of the peloton saw Roche drop four places in the overall standings to 24th place, but he won’t be concerned by that. The real race classification will be settled in the harder stages which lie ahead.

He is three minutes 43 seconds behind new race leader Rudy Molard (Groupama-FDJ), who took sixth on the stage and is now one minute and one second ahead of the previous leader Michal Kwiatkowski (Team Sky).

Martin is 75th overall but said after the stage that he feels signs of improving form. He started the race not targeting the general classification, and said that he was still feeling the effects of his crash in last month’s Tour de France.