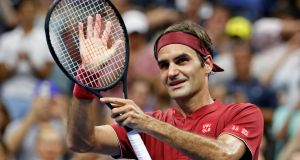 Roger Federer celebrates after defeating Yoshihito Nishioka during the first round of the US Open. Photograph: AP

Roger Federer made light of energy-sapping conditions to brush past Japan’s Yoshihito Nishioka 6-2, 6-2, 6-4 in his opening match at the US Open while Nick Kyrgios huffed and puffed his way into the second round in New York.

Where other players had slogged through long rallies as the temperature hit 32C, Federer kept his time on court to a minimum with a masterclass of serve-and-volley tennis, pulling the industrious world No 177 from one side of the court to the other at will.

Federer, the second seed, broke the Japanese lefthander in the opening game of the one-sided encounter and never looked back, rattling through his service games with a minimum of fuss to wrap up the first set in 28 minutes.

The Swiss took 35 minutes to close out the second and, with Nishioka firmly on the ropes, started the third by racing to a 4-0 lead before his Japanese opponent held serve.

Nishioka rallied briefly at the end, denying Federer the chance to serve out the set and battling back to 5-4 with his first break of serve.

But Federer put his beleaguered opponent out of his misery in his next service game, wrapping up the victory in one hour and 52 minutes.

Next up for the Swiss is a second-round clash with unseeded Frenchman Benoit Paire before a potential third-round meeting with Kyrgios who spent much of the match complaining of fatigue before pulling through 7-5, 2-6, 6-4, 6-2 against Moldovan baseliner Radu Albot.

“I knew it was going tough match. I’m just happy I got through it,” the mercurial Australian said.

The labouring win set up a meeting with Pierre-Hugues Herber but the dual grand slam quarter-finalist will likely need to lift his game against the Frenchman, a capable opponent who he retired against at Wimbledon last year.

“He’s got a big serve. He’s beaten me before. So it’s going to be tough,” Kyrgios said. “But right now I just want to get something to eat. I’m hungry.”

After sauntering through the opening set on Tuesday night, recovering from a service break down, Kyrgios collapsed in the second, constantly moaning to his players’ box during changeovers.

“I’m fucked, my legs are fucked. I’m cooked, I’m fucking done. I can’t play,” he said while seemingly clutching at his calf. He later said such antics “keep me relaxed”.

But, after a series of mid-match retirements over the past two years, the writing looked on the wall when Kyrgios dropped the second set and offered the world No 95 another break-point opportunity early in the third.

But he emerged from his malaise, breaking Albot after luring him to the net with a casual tweener, then firing a forehand pass cross court.

Kyrgios carried the momentum into the fourth set, breaking Albot twice more to charge ahead 4-0 before sealing victory on Louis Armstrong Stadium after two hours and 20 minutes.