Wozniacki beats the heat by serving up visions of margaritas 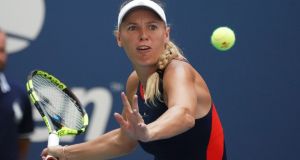 Caroline Wozniacki, one of the fittest players in tennis, found unique inspiration to beat the extreme heat – and Sam Stosur – on day two of the 2018 US Open: alcohol.

“I had the ice towels and used the shade a little bit,” the 28-year-old second seed said courtside on Tuesday afternoon alongside the frying-pan that is the Arthur Ashe stadium after a 6-3, 6-2 win that sent her into the shelter of the locker room and on to round two. “It helped. But, to be honest with you, I imagine I’m on the beach with a margarita in hand.”

Wozniacki will next play Lesia Tsurenko, the 29-year-old Ukrainian who took an untroubled hour and a quarter to beat the tough Belgian Alison Van Uytvanck for the loss of just five games on the exposed Court 15. Play was held up on Court 17 when a spectator collapsed, and organisers introduced the heat break of 10 minutes after two sets, if players requested it.

As it happens, Wozniacki was happy to get the job done inside that limit, in an hour and 24 minutes. Stosur did not look altogether shattered to be leaving the battlefield, either.

Ashe, the tournament’s cavernous showpiece court, was an intimidating cauldron on the first of some seriously hot days to come in Queens. Wednesday is expected to be hotter, with rain arriving perhaps on Friday.

Pointing to her fiance in the stands – the former NBA star David Lee, hatless and dressed in a black T-shirt – Wozniacki observed: “He should buy a hat.”

When the Dane is in this relaxed mood, she can be dangerous. She reached the final here against Kim Clijsters in 2009 and again five years later, losing that time against Serena Williams, again in straight sets.

For Stosur, her New York memories are distant and glowing. Seven years after reaching the pinnacle of her sport here by beating Williams to win her only grand slam title, she had to bow to the excellence of the American’s best friend on tour, with little to show for her efforts but a cheque for £42,000 – which buys a few margaritas.

Her bigger serve – peppered with eight aces, the fastest at 119mph, with five of them in the opening stanza, could not dent Wozniacki’s rock-solid defence, although she did convert one of two break opportunities in the first set before struggling to deal with her opponent’s refusal to bow to raw power. Wozniacki made the most of five of her nine break points and kept her unforced errors down to 12 in a typically disciplined performance.

The fiery number 10 seed Jelena Ostapenko lost concentration midway, but the Latvian found enough to defeat Andrea Petkovic 6-4, 4-6, 7-5 in Louis Armstrong stadium, which now benefits from a roof that protects the players from some of the heat. If Ostapenko can channel the combative spirits that delivered her the French Open last year, she could do plenty of damage in this draw.

Naomi Osaka is another contender to watch. Seeded No 20 but more threatening than that, the Japanese with the American twang had few problems defeating Germany’s Laura Siegemund, the world number146, 6-3, 6-2 in an hour and 18 minutes on Grandstand. In an interesting contest of unseeded hopefuls, China’s Yafan Wang was kept on Court Four for over two hours to grind out a 6-1, 3-6, 6-4 win against Slovakia’s Anna Karolína Schmiedlová.