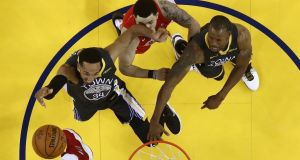 Fred VanVleet of the Toronto Raptors takes an elbow from Shaun Livingston of the Golden State Warriors in the second half during Game 4 of the NBA Finals at Oracle Arena in Oakland, California. Photograph: Ezra Shaw/Getty Images

The Golden State Warriors may never play another game at Oracle Arena, the concrete relic they call home, but that is suddenly a secondary concern at best for the NBA’s reigning but reeling champions. The Toronto Raptors moved to the brink of their first NBA championship on Friday night by outlasting the favoured Warriors 105-92 in a Game 4 slog. Fuelled by a Golden State-style haymaker in the third quarter, Toronto seized a three-games-to-one series lead to take back to Canada for Monday night’s Game 5.

The Warriors and their fans, who have revelled in three NBA titles in the past four seasons, understood what was at stake on this night perhaps better than anyone else. A three-games-to-one lead in the best-of-seven finals has led to 33 titles in 34 prior finals series. The only exception: Golden State’s loss against LeBron James and the Cleveland Cavaliers in 2016.

The Warriors will now need their own Cleveland-style comeback to ensure that their dynasty of the past half-decade – as the first NBA team to make five successive trips to the finals since the Boston Celtics in the 1960s – does not end in defeat. They could also clearly use Kevin Durant, who was expected to have returned by now from a strained right calf.

Golden State welcomed Klay Thompson and Kevon Looney back from injury on Friday night, before a noisy and nervy sellout crowd of 19,596 at Oracle, but the hosts could not muster a response to Toronto’s 37-21 edge in the third quarter. Kawhi Leonard scored 17 of his 36 points in the period, and Serge Ibaka finished with a crucial 20 points off the bench. The Raptors stretched the lead to as many as 16 points in the final period and have won 13 of the 16 quarters in the series.

“We were taking a lot of punches early, and we just kept standing in there and playing,” Raptors coach Nick Nurse said.

“I don’t play hero basketball,” Leonard told ABC’s Doris Burke after the game, attempting to play down his performance, which featured two early three-pointers in the third quarter to give Toronto its first lead. “I’m just playing to win.”

Thompson led the Warriors with 28 points, and his backcourt mate, Stephen Curry, added 27. But Curry missed seven of his nine attempts from three-point range, and no other Warrior scored more than 10 points in a game that, based on finals history, Golden State had to take.

The Warriors remain hopeful that Durant – who last played May 8th – can follow the lead of Thompson and Looney and finally make a comeback in Game 5 after missing the past nine games. But that is no lock.

Warriors coach Steve Kerr acknowledged in his pre-game news conference that Durant’s comeback may have to wait until next Thursday’s Game 6 back at Oracle – provided Golden State can get there.

The Warriors had to settle for Thompson (hamstring) rebounding from his one-game absence and Looney (chest) rejoining the rotation after Kerr initially described the reserve centre as out for the rest of the series after his Game 2 injury. But it was not enough against the gritty Raptors, who, remember, are not without their own injuries.

Leonard’s movement has looked laboured at various points since the Eastern Conference finals against Milwaukee, Kyle Lowry is playing through the constant pain of an injured left thumb, and Fred VanVleet needed seven stitches in Friday’s fourth quarter after taking an inadvertent elbow to the face from Golden State’s Shaun Livingston.

“I would say the cards are stacked against us in terms of injuries and things like that,” Curry said after Toronto’s Game 3 victory on the Warriors’ floor. “But it’s a sob story nobody really wants to hear.”

After two wins on the road, with the latest featuring a third-quarter rush straight out of Golden State’s playbook, Toronto has firmly established itself as the talk of the league. – New York Times