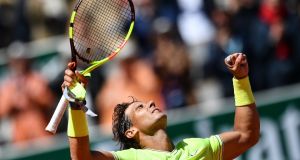 Rafael Nadal celebrates after winning against Roger Federer during their men’s singles semi-final at the French Open in Paris. Photograph: Martin Bureau/AFP/Getty Images

Rafael Nadal is one win away from a record-extending 12th French Open title after he coped better in horrendously windy conditions to tame the game of Roger Federer and claim a 6-3 6-4 6-2 victory in the semi-finals.

In the 39th match of their incredible rivalry, it was Nadal, for the 24th time – and sixth time at Roland Garros – who kept his cool, kept his feet moving and denied the 37-year-old Federer the dream of a second title.

Instead, it will be Nadal who will take on either the world No 1, Novak Djokovic, or Dominic Thiem, the man he beat in last year’s final, for the chance of an 18th Grand Slam title. He will also have the benefit of an extra day’s rest after the second semi-final was forced into a Saturday finish due to bad weather. Nadal will be favourite once again. “It was very difficult, the wind was incredible but I am very happy to be into the final again,” Nadal said, speaking in French after the match.

Back on clay for the first time since 2016 and the first time at Roland Garros since 2015, Federer had played superb tennis to get to the last four for the first time in seven years. Five straight wins against Nadal in recent years had changed the dynamic between the two, Federer finding a way to turnaround the Spaniard’s dominance. But clay, and Court Philippe Chatrier, in particular, is Nadal’s domain and so, despite Federer’s best efforts, it was the 11-time champion who came out a convincing winner.

The wind, which swirled and gusted at 50 miles per hour at times, made life incredibly difficult for both, but played into Nadal’s hands. The Spaniard has always been renowned as the best wind player, his footwork so outstanding, and with more margin of error on his shots, he will have felt more comfortable than Federer, whose aggressive game-style requires perfect timing.

Nadal started strongly, breaking on his way to a 3-0 lead but Federer, trying to attack the space on the forehand side of Nadal, hit back to get back on serve at 2-3. A long sixth game was the key in the opener, Nadal finally taking it to break for 4-2 and he held the advantage throughout to take it 6-3 with a stunning cross-court backhand.

Federer tried everything – as the clay was whipped up off the court – drop shots, serve and volley, angles and slice – but Nadal’s defence was stunning, always asking the question, asking the Swiss to hit one more shot. At 4-4, Federer was in the second set, but from 40-0, he was broken and Nadal served out the set.

Nadal snatched a break for 2-1 in the third set and after holding serve, thanks to one utterly incredible point when he raced from side to side before ripping a backhand winner. The crowd tried to get Federer going with shouts of “Roger, Roger, Roger” but another break gave Nadal a second break 4-1 and he held on to clinch victory, raising his hands over his head as the final point went his way.

Djokovic’s hope of winning a fourth straight Grand Slam title were in jeopardy when rain interrupted his semi-final against Austrian Thiem.

Top seed Djokovic is bidding to become the first man in the professional era to twice hold the four big prizes in tennis simultaneously.

In gusty winds Thiem’s powerful groundstrokes helped him dominate the first set and Djokovic was in trouble early in the second when he fended off a break point.

He got the crucial break in the eighth game of the second set, however, when a Thiem forehand kissed the netcord and flew long and Djokovic levelled the match.

With rain clouds closing in Thiem broke serve with a huge forehand early in the third, shortly before play was suspended for the day. Organisers said they still hope for a Sunday finish. – Guardian and agencies