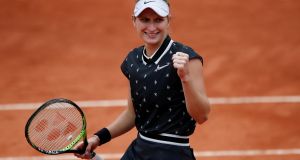 No rain, no flowers, no regrets – that was the story of Johanna Konta’s exit from the French Open on Saturday, one step from the final and a slice of history.

Her teenage tormentor, Marketa Vondrousova, who had “No Rain, No Flowers” tattooed on her strong left arm as a reminder of the possibilities that can be fashioned in adversity, blossomed before our eyes, the youngest slam finalist since Caroline Wozniacki here in 2009. But Konta, echoing Edith Piaf, preferred a different philosophical motif: Non, je ne regrette rien…

While Konta, 11 years older at 28, twice blew a 5-3 lead – and later declared she had no cause to be concerned about her game or her decision-making – Vondrousova confronted the largely good and occasional bad of her performance.

Asked how she rescued the deficit in each of the sets, she said: “I don’t really remember, but I think she missed one volley and it was pretty easy.” As for the tie-break, which might have gone either way, she said: “The match before, I did double-fault on match point, and I was, like: ‘Oh, my God, it’s here again.’”

Under pressure and in dreadful conditions, she lengthened the rallies, trusting her game and waiting for the mistakes that piled up at the other end: 41 unforced errors from Konta in an hour and 45 minutes.

The 7-5 7-6 (2) victory earned the languid Czech with the easy power a match against the redoubtable Australian Ashleigh Barty, who had her own brain fade in the other semi-final – and confronted it as such. She squandered a 5-0 lead in the first set against another brilliant teenager, Amanda Anisimova, but regrouped, fought back and, in just under two hours, prevailed 6-7 (4) 6-3 6-3.

“It was pretty brutal out there,” Barty said. “I’m proud of the way I was able to fight and scrap and hang in there and find a way when I kind of threw away that first set. I played some really good tennis. I played some pretty awful tennis.”

She should start favourite in Saturday’s final, but will need to concentrate from start to finish against a left-handed opponent whom Konta correctly identified as “a tricky player”.

Britain’s best female player leaves Paris wondering what might have been. Or at least she should, instead of excusing a patchy performance that did not reflect the quality of her tennis in a rousing run to the semi-finals.

Three times now she has been in sight of making to the last match of a slam, but this was her best chance. In Melbourne, she came up against the experience and doggedness of Angelique Kerber; at Wimbledon, Venus Williams survived a nervous start to get the win. On Friday, Konta should have tamed her callow foe, yet seemed trapped in her own anxiety.

When it was put to her that she seemed to be hitting the ball flatter to cut through the swirling wind – a strategy identified by Chris Evert, who won this title seven times – and that her error count possibly climbed because of that, Konta said: “I don’t know how many unforced errors I hit. I actually didn’t think I was hitting the ball flatter. The conditions out there were quite tricky. My opponent also makes things tricky out there. She’s a tricky player.”

Konta was justified in declaring that she has had a great tournament to cap off a great clay season. It is just that she did not cash in at the end of it, narrowly failing to be the first British finalist here since Sue Barker 43 years ago.

“I had a lot of really amazing experiences this fortnight. There is nothing for me to be disappointed in or upset about. I lost a tennis match – but I also won five. I can only take the good things from that. Even today, I lost the match but I did the best that I could and I’m proud of that effort.”

This is what she has identified as “acceptance”, a fatalism woven into the fabric of her job. As Serena Williams and a hundred others say, it is what it is (even when it isn’t). But great players have the ability to adapt and, crucially, control the pace and rhythm of a contest, manipulating an opponent like a matador leading a bull to destruction.

Konta said of the botched drive volley that cost her the first set when 5-3 up: “I took the opportunity to come in and take it out of the air, and that’s what I would do nine times out of 10. And probably nine times out of 10 it probably would go in, as well. Even the following point I think I hit a slice that maybe hit the tape. I feel very comfortable with how I played and what I tried to do out there.”

There is much philosophising in tennis, where another match is always on the horizon, another chance to win or, as Stan Wawrinka likes to say, quoting Beckett, fail better. But aphorisms and tattooed slogans can take a player only so far. What they all know to be true is that winning is all that matters. To win you usually have to make fewer mistakes than your opponent, play freely but not frenetically and be ruthlessly honest about your performance. Denial is not the same as acceptance.

As for Vondrousova, the only wondering left for her is how to handle Barty on Saturday. She was ecstatic after the biggest win of her short career. “It’s the best week of my life so far,” she said, beaming.

With nerves jangling on both sides of the net, Vondrousova held. A spectator distracted Konta at 15-0 and she dollied a poor drop shot to give Vondrousova an easy point. A misjudged backhand found the tramlines and, with rain threatening, Konta hurried her game with another set-up return, dropping serve for five-all.

A fifth double fault by the teenager gave Konta encouragement in the 11th game but she needed to hold to stay in the set, having had it in her gift moments earlier. A hot Konta backhand went wide. Vondrousova put up a semi-lob that dropped inside the line, and the set was hers. – Guardian