England v Ireland at Lord’s: Flights, getting to the ground and tickets 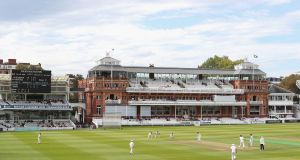 Ireland take on England at Lord’s in July for the first ever time in a Test match. Photo: Christopher Lee/Getty Images for The Cricketer

For the first ever time Ireland will play a Test match against England this summer at the historic Lord’s on Wednesday July 24th until Saturday July 27th - play starts at 11am each day. With England coming off the back of the World Cup and facing into the Ashes it should be an interesting four days at the most historic of cricket grounds. Here are some pointers on how you could be there.

London City Airport: This is the closest airport to Lord’s, located less than 12 miles away. Sitting along the Royal Docks it’s the handiest airport to fly into for going pretty much anywhere in the city centre but it can be expensive. However, at the time of writing there are return flights from Dublin on the first day (Wednesday July 24th) for €115 with British Airways. The flight out is at 7am, coming back at 8.30pm meaning you may have to leave the ground slightly before close of play (usually around 6.30pm) to make it back to the airport.

The same option on Thursday or Friday is over €160 while flights from Dublin to London City are limited on a Saturday. You can also fly from Belfast to London City but there are no flights back later than midday on any of the four days.

Heathrow: Just less than 17 miles from Lord’s, Heathrow can be flown to from Cork, Shannon or Dublin. Flights are cheapest from Dublin during the week of the match and the airport is also an option if you’re looking to do a day trip. For the first day of the match you can currently fly out from Dublin at 7.30am with British Airways and back at 9.10pm that night with Aer Lingus for €120. On Thursday that same option is €110 while on Friday you can do both journeys with Aer Lingus for €116 with the outbound flight at 6.30am meaning you have more time to get to the ground.

Saturday is a little trickier as flights back are slightly earlier but if you were happy enough to cut it tight you can fly out at 6.30am with Aer Lingus and back at 8.35pm with British Airways for €116.

Getting to the ground

From London City Airport: All going well it should take 40 minutes or so to get from the airport to the ground with one switch on the underground. From the DLR station at the airport you take the train to Canning Town station. There you switch to the Jubilee Line on the underground and take that to St John’s Wood station. From there it’s a five minute walk to Lord’s.

Alternatively a black cab will set you back somewhere around the £40 mark but with the traffic along the docks it usually takes longer than the tube.

From Heathrow: While the Heathrow Express is a handy way to get into the city centre it can be quite expensive. Alternatively you can take the TfL Rail from Terminals 2&3 to London Paddington. From there it’s a 30 minute walk to Lord’s or you can jump in a cab which will only take five minutes and cost about £10.

Tickets are still available for all four days and can be bought at tickets.lords.org. It will require you to register a name and email address before you can purchase.

There are plenty of sections still with seats free and tickets range from £20 to £85 with the majority that are still on sale priced at £50.

Munster’s Alex Wootton to join Connacht on year-long loan deal 13:01
Angling Notes: A strange fishing day 12:52
Lewis Hamilton the fastest in Austria Grand Prix practice 12:27
Ole Gunnar Solskjaer: ‘The sky’s the limit’ for Mason Greenwood 12:07
Monica Seles: The warrior queen who could have been the best ever 11:25
Here is your handy guide to sport on television this week