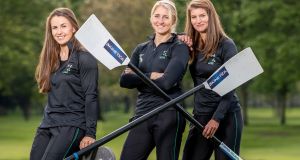 Ireland will send a women’s four and pair to the second World Cup regatta in Poznan, Poland in two weeks’ time. However, Aifric Keogh, who has been ill, will not compete.

The pair will be the very promising under-23 unit of Claire Feerick and Eimear Lambe, younger sister of Ireland Olympian Claire Lambe.

Monika Dukarska had been Keogh’s partner in the pair which was targeted at the European Championships. That pair could not compete because of Keogh’s illness, and Dukarska moves into the two seat of the new four. Tara Hanlon, Aileen Crowley and Emily Hegarty, who will stroke the boat, complete the crew.

Both the pair and four are Olympic-class crews and this is Olympic qualification year.

The two Ireland coaches behind Ireland’s success at the European Championships last weekend have flown under the radar – yet they have been a big part of the recent success of the sport internationally.

I think with Sanita, she’s just a very brave and tough woman. She has started to realise that

David McKenzie McGowan has accompanied Sanita Puspure on her journey from athlete of great potential (an Olympian in 2012 and 2016, but a C finalist in both) to world and European champion. What has made the difference?

“I think with Sanita, she’s just a very brave and tough woman,” McKenzie McGowan says. “I don’t think there is any difference in Sanita from 2012 and 2016. I think she has started to realise she is, in fact, tough and she is, in fact, very brave.

Puspure told The Irish Times that she had not felt the “springiness” for the Europeans that she had felt for last year’s World Championships, but her coach provides an explanation: the programme is built around athletes being in top form for the Olympic Games and, working back from that, the World Championships. Puspure was a “finely-tuned machine” for the Worlds and rightly senses that she was not at that peak for the Europeans.

To win there while below her very best suggests that, all going well, Puspure can be at or near the top for some time yet.

Dominic Casey is World Coach of the Year. He is always shy of being quoted, so the honour was not won by banging his own drum. Yet someone should. The Skibbereen man is the coach of the world champions in the lightweight men’s double (Paul and Gary O’Donovan) and has just guided a completely different crew (Fintan and Jake McCarthy) to fifth in the European Championships – in the same discipline.

“I’m happy like, happy for the boys,” Casey says.

Medical student Paul O’Donovan has returned to full-on training, and the last week of this month brings trials at which four men – the O’Donovans and the McCarthys – will fight it out for places in the Ireland lightweight double. Four women will vie to fill places in the women’s lightweight double. Cliodhna Nolan (NUIG) and Aoife Casey (UCC) will join Skibbereen women Denise Walsh and Lydia Heaphy, who formed the crew which took 12th at the European Championships.

The Irish University Championships are set for Lough Rynn this Sunday as Trinity are set to hold their private match against Queen’s on Saturday. The University Championships had to be abandoned due to bad weather in early April. UCD won the men’s four then, and their senior eight must be favourites to win this time. However, the presence of top Ireland international Ronan Byrne gives the UCC eight a lift. He also competes in the single sculls.

The UCC women’s eight, stroked by Margaret Cremen, should get a strong test from Trinity in their race. NUIG also contend in a battle which might be a highlight of the regatta.

The rowing season at home has been terribly patchy, mostly due to the weather

The rowing season at home has been terribly patchy, mostly due to the weather. The most recent event to fall is the Fermoy Regatta, scheduled for June 30th. The water level at the venue is low, despite ongoing attempts by the club to get the agencies in charge of the weir to restore it. Regatta secretary Paul Kavanagh says that the continued existence of the club is now in doubt.

1 Tipping Point: DeChambeau’s transformation raises questions, but who will ask them?
2 Ken Early: Resurgent United can be the top team – in Manchester
3 Coronavirus implications will delay completion of CVC’s €450m Six Nations deal
4 Monica Seles: The warrior queen who could have been the best ever
5 Lewis Hamilton: I was ‘silenced’ over Colin Kaepernick
Real news has value SUBSCRIBE