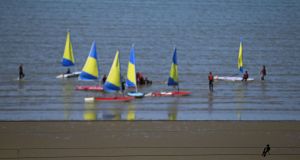 Back to back victories was the order of the day at the ICRA National Championships on Dublin Bay yesterday for the 93-strong fleet gathered from around Ireland.

Five national titles are at stake but although clear leaders emerged after day one, a forecast of stronger winds on Saturday is widely expected to shake up the standings with five races still to sail.

Only the biggest entries in Division Zero have a three-race series as they sail single, long coastal courses each day.

The opening day saw on-the-water leader Eleuthera plummet to last place after sailing past the North Kish buoy on the wrong side before later noticing the chasing pack sail the correct course.

Paul O’Higgins’ Rockabill VI won the day after the four-hour race sailed in a light to moderate onshore breeze.

Elsewhere in the event, John Maybury’s Joker II topped Division One with emphatic back to back wins as the defending champion.

Also performing with neat consistency for the day were Johnny Swan’s Harmony in Division Two and Rory Fekkes F’n Gr8 in Division Three. All three divisions comprise the bulk of the turnout for the championships that were last sailed in 2017.

Conditions for the second day are expected to freshen but with the continued threat of rain.

Matt Williams: Scrum stoppages turning rugby into a boring spectacle 06:30
Ireland retirement was ‘hardest decision’ for David McGoldrick 06:30
Evergreen: Johnny Sexton the latest Ireland outhalf to keep on keeping on 06:00
Disappointing Nations Cup set for a finale of ‘farce’ 06:00
Michael Dempsey: Teams probably in better shape than ever this year 06:00