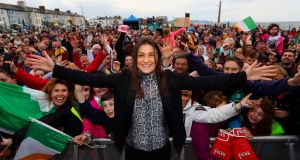 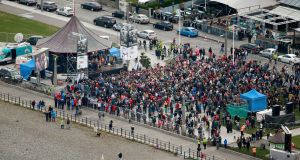 Katie Taylor has been welcomed back to her hometown of Bray, Wicklow this evening, an aerial view of the crowd which had gathered on thesSeafront of the North Wicklow Town. Photograph Nick Bradshaw/The Irish Times

The audience, which was made up of a huge number of young girls and teenagers, screamed chants of we love you Katie’ as the four-belt boxing sensation took to the stage with her mother, siblings and extended family.

Speaking beforehand Taylor expressed her gratitude to the some 2,000 well wishers who had turned out to celebrate her victory. “It’s incredible the support I’ve got here, even during the low times, the Rio Olympics even. The support that I get from people in my town is absolutely incredible, it’s great to share the celebration with everyone,” said Taylor. “I’m definitely living the life of my dreams right now.”

Asked how she felt about being a role model for younger female boxers, Taylor said “This is what it’s all about really. I think that’s my greatest legacy just seeing every boxing club in the country packed with female boxers and the talent coming up is amazing, they’re going to be superstars in sport.”

Speaking from the stage, Taylor described the elation she felt at seeing Madison Square Garden filled with tricolours during her fight in New York against Belgian WBC champion Delfine Persoon. “To fight in Madison Square Garden, the Mecca of boxing for undisputed titles, it was absolute dream.”

The training in preparation for Saturday’s match was gruelling, said the boxing champion. “I didn’t really realise how different the amateur was to the pro until I turned pro, it has been a great challenge for me. I came from the bottom of my career at the Rio Olympics to the pinnacle of the sport now. I just kept going and never gave up and I’m going from strength to strength. It’s amazing to be in this position.”

Standing near the front of the crowd, Eva O’Brien (13) and Lamart Ebbs (12) draped tri-colours across their shoulders as they shouted out to the Bray champion. “We came here because she’s amazing,” said Eva. “She’s made a name for Ireland. The other girl didn’t do good enough to win the fight, if she was the world champion she would have beaten Katie but Katie did it. Katie gave it her all as usual.”

Further back, Bray women Sharon Plunkett, Rose Walsh and Linda Flanagan were holding up their own large tricolour. “She trained so hard for years to get where she is and she’s so modest,” says Ms Plunkett. “She’s just pure, pure ordinary and no airs and graces about our Katie,” adds Ms Walsh. “She’s not a show off, she’s real.”

Nearby, Lucille Lang was arranging a collection of flags in her daughter Sophie’s hair. Ms Lang used to train in the same boxing club as Taylor and describes her as a great role model for her son and daughters. She joined the crowds on Saturday night at the Martello hotel on the Bray seafront to watch Katie fight in New York. “It was great atmosphere, like the World Cup. It was very close and when they gave the results we were all in suspense waiting and then everyone just jumped and screamed. It’s girl power, isn’t it?”