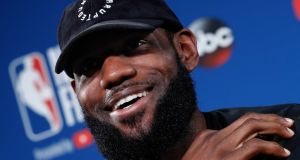 The biggest name in basketball is headed to Hollywood. Through a short news release issued by his agents at Klutch Sports, LeBron James announced on Sunday night that he would join the Los Angeles Lakers in free agency and sign a four-year, $154 million contract. In what has become an every-four-years ritual for the three-time NBA champion, James has chosen to switch teams for the third time in his career, opting to leave his home-state Cleveland Cavaliers for a second time for one of the league’s glamour franchises.

James took to Instagram to say goodbye to Cavaliers fans, posting a picture of Cleveland’s championship parade in 2016 with the caption: “Thank you Northeast Ohio for an incredible 4 seasons. This will always be home.” The deal includes a player option that will enable James to return to free agency after the third season of his new contract. James does not plan to hold a news conference to elaborate on the decision until later in the offseason, according to a person with knowledge of his plans who was not authorised to discuss them publicly.

After four seasons, four trips to the NBA Finals and one unforgettable title run in 2016 with the Cavaliers - in a city that had gone 52 years without tasting championship glory - James will play in the Western Conference for the first time. A native of Akron, Ohio, James began his professional career when Cleveland made him the No. 1 overall pick in the 2003 draft.

His new team in Los Angeles has missed the playoffs for a franchise-record five consecutive seasons and failed in its attempts to lure All-Star free agent Paul George away from the Oklahoma City Thunder this offseason. The Lakers have also been stymied in their efforts to persuade the San Antonio Spurs to trade them All-Star forward Kawhi Leonard, but none of that mattered in the end when it came to James.

He elected to join the Lakers regardless, making his decision known on the first 24 hours of free agency - and on the same day his agent, Rich Paul, met with a Philadelphia 76ers contingent trying to sell James on joining the Sixers. Only the Cavaliers had the ability to pay James, 33, a five-year maximum contract worth $207 million. But short-term contracts have become standard for James since he left the Miami Heat to return to Cleveland in July 2014. Such deals give him the freedom to keep his options open and maintain a measure of leverage over his employers if they fail to keep him happy.

The Lakers followed up the low-frills announcement of James’ impending arrival by quickly coming to terms on a one-year, $12 million deal with veteran guard Kentavious Caldwell-Pope, another Klutch Sports client. The reality, though, is that the Lakers’ roster - even with James - is not regarded as top-contender material, given its reliance on younger players such as Kyle Kuzma and Brandon Ingram, polarizing guard Lonzo Ball and an up-and-coming coach in Luke Walton.

But James’ willingness to make a minimum three-year commitment to the Lakers means that the team’s lead basketball decision-makers - Magic Johnson, the team’s president, and Rob Pelinka, the general manager - have some runway to keep pursuing a trade for San Antonio’s Leonard or other roster upgrades that could eventually nudge the Lakers closer to the Golden State Warriors’ level.

In James, the Lakers acquired the most dominant player of his generation. A four-time Most Valuable Player, he led the Miami Heat to two titles and added a third with the Cavaliers. That crowning achievement came in 2016, when Cleveland staged an improbable upset of the Golden State Warriors to win the title in seven games. It was the Cavaliers’ first championship, and one that cemented James’ legacy as one of northeast Ohio’s most celebrated figures.

It was a comeback story for the ages - in a literal sense. After spending the first seven seasons of his professional career with the Cavaliers, James had left for Miami as a free agent in 2010 to team up with Chris Bosh and Dwyane Wade. It was a productive partnership for James - the Heat had a dominant four-year run - but he left the Cavaliers in ruins. Without him, they were one of the worst teams in the NBA. Many fans said they would never forgive James for spurning them in favor of South Florida.

But in a ballyhooed move, he returned to the Cavaliers in 2014, pledging to deliver a championship. He made good on his promise. James led the Cavaliers to four straight finals appearances - business as usual for him. Between Miami and Cleveland, James has played in eight straight finals. He has become a postseason staple - and a boon for the league, which has seldom, if ever, produced a player who so effortlessly combines strength and finesse, a 6-foot-8 forward who has the body of a bulldozer and the mind of a professor.

“In my opinion, he is the best player to have ever played our sport,” Brett Brown, coach of the Philadelphia 76ers, said late last season. Brown rattled through his reasons for that assessment, citing James’ consistency in the postseason, his physical stamina, the volume of minutes he plays, his preparation, his versatility, his dominance - the list went on and on. “And he just keeps getting better,” Brown said. James appeared to have a solid partnership in Cleveland with Kyrie Irving, the All-Star point guard who was drafted by the Cavaliers in 2011. But last summer, Irving shocked the league - and James - by requesting a trade, in part, it appeared, so that he could escape James’ shadow. The Cavaliers honored Irving’s request by sending him to the Boston Celtics, who instantly became a contender in the East, in exchange for Isaiah Thomas and others.

Without Irving, the Cavaliers struggled for long stretches last season, even as James assembled one of the finest seasons of his career. He averaged 27.5 points, 8.6 rebounds and 9.1 assists per game, shooting 54.2 percent from the field. He also played in all 82 regular-season games for the first time in his career.

But the Cavaliers experimented with different lineups, overhauling their roster more than once, and the point guard position was a grease fire at times. Thomas was hindered by a bad hip and was eventually traded to the Lakers. The Cavaliers traded for George Hill before the playoffs, but he, too, was slowed by injuries. The result was a hodgepodge season that James said was one of the most challenging of his career.

That James still managed to drag the Cavaliers into the finals - again - was nothing short of heroic, even if it ended in a sweep by the Warriors in a series that felt anticlimactic.