Wimbledon: Second seed Wozniacki falls in second round to Makarova

Pliskova wins battle of former number ones with Azarenka; Serena and Venus Williams both beat qualifiers 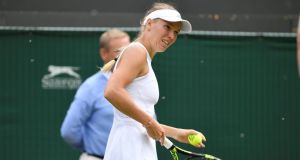 The second seed Caroline Wozniacki saw her hopes of winning a first Wimbledon title shot down by Russia’s Ekaterina Makarova amid a hail of flying ants on Wednesday.

The Australian Open champion recovered from 5-1 down in the final set to level at 5-5 but could not finish the job as the world No 35 held her nerve to win 6-4 1-6 7-5 send Wozniacki tumbling out in the second round.

“I was really nervous because Caroline will never miss and you need to win the points, play the winners,” Makarova said.

“I knew that and I think I was a little hurried because I thought I needed to be more aggressive. But I am so happy that I got calm at 5-5 and did my work again. I told myself, no, you’re not going to lose this match, with all those match points. I told myself that, I forgot it and started over.”

In terms of ranking, this was not in the same class as the losses for Petra Kvitova, Maria Sharapova and Sloane Stephens, each of whom were beaten in the first round here by far lower-ranked opposition. Makarova is a former top 10 player who beat Wozniacki at last year’s US Open and she has beaten Serena Williams and Venus Williams at grand slams before.

The left-hander led 5-1 in the first set and though Wozniacki hit back to 5-4, Makarova held on to move ahead. Wozniacki also complained about the hordes of flying ants that had invaded Court No 1, but the Dane recovered to level the match.

Makarova then romped to a 5-1 lead, only for Wozniacki to storm back again. In the second round in Melbourne this year, she trailed Jana Fett of Germany 5-1 in the decider only to come back to win and when she recovered from 5-1 down, saving four match points, to level at 5-5, it looked like she might do it again.

But Makarova recovered her poise, held serve for 6-5 and finally snatched victory on her sixth match point as she hit a backhand drive volley into the open court, setting up a third-round clash with Lucie Safarova of the Czech Republic.

Seventh seed Karolina Pliskova won a battle of former world number ones as she beat Victoria Azarenka 6-3 6-3 to reach the third round at Wimbledon for the first time on Wednesday.

Big-serving Czech Pliskova reached the top of the rankings a year ago at Wimbledon despite losing in the second round – the fifth year in succession she had lasted only two matches.

From the moment Azarenka dropped serve with a loose error in the third game, Pliskova always looked likely to break that sequence against the Belarussian who is still trying to rediscover her past form after returning from having a baby.

Azarenka tried to fire herself up when she resisted some pressure to hold serve at the start of the second set.

But Pliskova broke for a 5-3 lead and was then helped by two Azarenka double faults that brought groans from the sedate crowd who had been hoping for something more exciting.

“Very happy with my victory as it is the first time I am in the third round here. The last few years I was waiting for a good result and it still didn’t come, maybe this year is the time; I am feeling great.”

She will play Romanian 28th seed Mihaela Buzarnescu next.

Seven-times champion Serena Williams moved up a gear to beat Bulgarian qualifier Viktoriya Tomova 6-1 6-4 and reach the third round.

The 36-year-old American barely broke sweat in a one-sided first set but was tested by the world number 135 in the second without ever looking troubled.

While the Centre Court crowd clearly appreciated the sight of Williams in full flow they took a shine to the plucky Tomova who battled hard to make a match of it.

Even ultimate warrior Williams applauded a couple of her opponent’s winners late in the second set before completing victory in 66 minutes.

The 25th seed will face the winner of the match that followed her on Centre Court between Germany’s Tatjana Maria and France’s Kristina Mladenovic.

“It was better than my first round and I’m happy that I’m going in the right direction,” Williams, who took her winning streak at Wimbledon to 16 matches, said on court.

Serena’s sister Venus, a five-time champion, dropped her opening service game and lost the first set before finding her rhythm to beat qualifier Alexandra Dulgheru 4-6 6-0 6-1 in the second round.

The 38-year-old American brought her experience to bear from the second set to seal a comfortable win in her first meeting with the Romanian.

“It’s just credit to her, she played very well and took advantage, you have to at these championships,” Venus said of Dulgheru’s first-set performance.

“It’s not easy to play someone you haven’t played, and I’m sure she’s seen me play a lot, so she was extremely competitive,” she added.

Dulgheru, world number 141, came out fighting in the deciding set, won her serve and had two break points for the second game, only for Venus to save both and hold.

Asked about her improved performance from the second set and whether it confirmed her form as she seeks a second consecutive final and sixth title, she said: “It’s just about winning a match, whether it’s your best [tennis] or not doesn’t matter.”