Chris Froome eager to move on after being cleared of doping 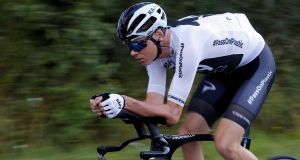 Chris Froome, cleared by the UCI on Monday of any doping infraction, admitted he is keen to put the race promoters’ move to ban him from racing in this year’s Tour de France behind him as he prepares to defend his title, with the race starting on Saturday.

“I can understand the decisions the promoters [ASO]took,” Froome said. “But I’m drawing a line in the sand here and focusing on the three weeks ahead.” Froome also described the nine-month process surrounding his adverse analytical finding, that ultimately led to him being cleared of wrongdoing by the sport’s governing body, as “damaging”.

“I’m extremely grateful that all the facts have been established and to draw a line under this and move on to bike racing again,” Froome said. “I knew that I didn’t do anything wrong. I’m extremely relieved and it’s a huge weight off my shoulders going into this year’s Tour, which is going to be the biggest challenge of my career.”

As Team Sky faced the Tour de France press corps in rural Vendée, Froome and Dave Brailsford maintained that Froome’s adverse analytical process should never have been made public.

“When somebody’s accused of something they haven’t done and that becomes public, then anyone with any sense of fairness would look at that and think that’s challenging,” he said. “But what I look at is a young man who’s had that happen, his worst nightmare, and manage to maintain his dignity, his performance and win the Giro d’Italia in the meantime. To me that’s exceptional.”

But Brailsford insisted that Sky would not be releasing any further detail on the ruling and that in fact the onus to share that with the public now lies with Wada and the UCI.

“The shadow of doubt shouldn’t exist if we trust in our authorities,” he said. “The people who made the decision were Wada and the UCI, not Team Sky. I think that’s where the information about how that decision was made should come from.”

But tensions surrounding Froome remain high. That nervousness was emphasised by the presence of the gendarmerie and his personal bodyguard at Wednesday’s press conference. After Team Sky took security advice from experts at BSkyB during a recent race in France, additional security is now expected to be implemented around Froome once the Tour is under way.

Meanwhile the UCI president, David Lappartient, sought to explain further the UCI’s clearing of Froome. “An international federation such as the UCI has to follow the World Anti-Doping Agency,” he said. “They are the experts on this and their experts finally decided that this case was not an anti-doping rule violation so we had to follow the decision from Wada.”

Brailsford said he was “absolutely confident since the day this started” that Froome had stayed within the permissible dose.

“It was never in doubt for us that this whole thing would get cleared up. But that whole episode is over and Chris deserves a lot of credit for the way he’s handled that whole situation. That gives me a little bit of extra pride that I am part of this team leading into the Tour.”

Froome and Sky may be feeling proud but others, including Tom Dumoulin, runner-up to Froome in May’s Giro d’Italia, are less enamoured of the outcome. “I’m not blaming Froome,” Dumoulin said. “He’s been cleared. It’s how the whole case has been handled, which is just a mess. It’s really unfortunate. It’s not what cycling needs.

“It’s ruining the reputation of cycling and fans are probably walking away from the sport because of this,” the Dutch rider said, adding: “Nobody deserves to be showered with urine. Froome does not deserve that.”

Froome, who had urine thrown at him in 2015 and was taunted by fans dressed in inhaler costumes during May’s Giro, also sought to calm the atmosphere. “If you’re not necessarily a Team Sky fan or a Chris Froome fan, come to the race, put a jersey on of the team you support and support the race in a positive way,” he said. “Don’t bring negativity to the race. That’s my advice.” – Guardian service