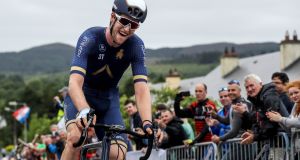 At six foot nine, Conor Dunne is someone who stands out in the pro cycling peloton. But the Aqua Blue Sport rider will be even more distinctive for the next 12 months, earning the right to wear the Irish national champion’s jersey with a superb performance in Collooney, Sligo.

Dunne was one of the most aggressive in the race and was part of a four-man break which got clear on the seventh of ten laps. He, Darnell Moore (Caldwell Cycles Omagh), Rás stage winner Robert-Jon McCarthy (JLT-Condor) and Jamie Blanchfield (Panduit Carrick Wheelers) combined to eke out a solid margin over others in the race, including WorldTour riders like Nicolas Roche (BMC Racing Team) and defending champion Ryan Mullen (Trek-Segafredo).

Dunne later pushed onwards with Moore before dropping him on the final lap and powering to the line. Moore held off the chasers for silver, also securing the national under 23 title; Mark Downey (Team Wiggins) won the sprint for bronze. He was second of the under 23 riders, with teammate Michael O’Loughlin third.

“I am super, super proud to win today,” he said. “I can’t really believe it. It’s been a bit of an up and down year – I got a couple of sicknesses through the years, just before I was getting my good form. It was super-frustrating. This last month, I have just been fighting for form again and getting better and better. So I knew I might have a good chance today.

“The legs felt good today and then it was just trying to be tactically aware. I am just super-chuffed to pull it off.”

On Saturday Eve McCrystal took a superb victory in the women’s championships, beating Lydia Gurley (Aerocoach) and Alice Sharpe (Torelli-Brother). They were part of a four-woman break created by Kelly Murphy (Chapter 2), who won the women’s time trial championships on Thursday.

McCrystal was best in the sprint, and was elated with her win. “I have been waiting for this for so long, and I will wear my jersey with pride,” she said. “It was really hard. On the climb, I just had to dig in on the third lap. I had to really hang in and do what I could do. At the end I had to see if I could go over the top with them and play to my strengths and go for the sprint.”

Adam Ward (Powerhouse Sport) was best in the junior men’s race, finishing ahead of Ben Healy (Zappi RT) and Aaron Doherty (NRPT). Healy, the new junior time trial champion, forged the winning move but Ward was faster in the sprint.

“I managed to hold onto Ben going up the climb, then the last corner I managed to come in first and hold him off for the sprint,” he said. “So it turned out alright!”