India make light work of Ireland at a scorched Malahide 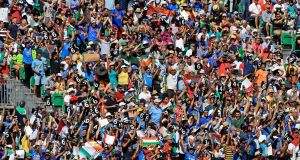 Ireland got a stark reminder on Friday just how far off the pace they are in the world of international Twenty20 cricket as India wrapped up a massive 143-run victory to complete a 2-0 series win in front of a packed house at Malahide.

Gary Wilson’s side would have started the day with the intention of getting a little closer than the 76-run defeat in the opening game on Wednesday, but instead a dreadful batting display saw the home side bowled out for 70 in the 13th over, their second lowest score in a T20 international and their lowest in Ireland.

Wilson was one of only three Irish batsmen to make it in to double figures, scoring 15 before being bowled by Kuldeep Yadav. The left-arm chinaman bowler added three wickets to the four he took in the first game, while leg-spinner Yuzvendra Chahal took another three to make it six in two games and take the man of the series award.

The crowd stayed to the end as yet again India were made feel like the home side, such was the wonderful level of support for the boys in blue. The sound of Indian families making their way into the ground was interspersed with those of ticket touts looking for any spares, a rare sound indeed at a cricket ground in Ireland.

The Indian tri-colours were waving vociferously before the game and also providing some in the crowd with a bit of cover from the blazing sun, the only shade in the stands coming from the stately oak trees that line the avenue up to Malahide Castle.

Wilson again won the toss and inserted India to bat as he had on Wednesday, the XI showing one change as William Porterfield came back in place of Stuart Poynter, with Wilson taking over behind the stumps.

India made four changes in total and one of those, KL Rahul, dominated proceedings once play got underway. Having finished the recent Indian Premier League as the third-highest run scorer, he continued his form by attacking the Ireland bowlers from the start alongside Indian skipper Virat Kohli, who moved up to open the batting.

Simi Singh was given the new ball as Ireland opened with spin, but Rahul didn’t take long to get his eye in with two fours in the first over as 12 runs were scored. Peter Chase had taken four wickets in the first game and he completed a memorable series by taking the wicket of Kohli for a second time in three days, with George Dockrell taking a fine catch after making up huge ground running around the boundary at deep square leg.

Stuart Thompson gave up 17 runs in his single over as he struggled with his line and India’s second-wicket partnership of Rahul and Suresh Raina would go on to add 126 runs before Kevin O’Brien came on to bowl, holding a dolly of a return catch as Rahul departed for 70, having hit six sixes and three fours in his 36-ball stay.

Rohit Sharma had hit 97 in the first game but his innings lasted two deliveries this time around as O’Brien took a second wicket in his first over, Paul Stirling taking a fine low catch at backward point.

O’Brien would add Raina to his haul in the 18th over after the left-hander had made 69 and the all-rounder had figures of three for 19 after three overs. But India’s middle order finished strongly, especially Hardik Pandya, who clubbed four sixes and a four, his nine-ball stay enough to see him finish on 32 not out as 39 runs came off the last two overs, including 21 off the last as O’Brien’s figures took a pounding.

It pushed India past the 200 mark again, the first time they’ve made back-to back scores of more than 200 in T20 cricket, and at 213 for four put the game well beyond Ireland.

Sadly that distance was monumental in the end, with Ireland’s innings never recovering after Paul Stirling went second ball to Umesh Yadav for a duck.

The Ireland women’s side made a much better fist of things in their match against Bangladesh, Cecelia Joyce making a fine 60 off 47 balls in a total of 124 for eight. Bangladesh lost six wickets chasing down the total, with Ciara Metcalfe and skipper Laura Delany taking two each, the visitors completing a 2-0 series win by scoring the winning run off the first ball of the final over. The third game in the series takes place on Sunday at Sydney Parade, with a 2.0pm start.

(at Malahide CC): Ireland won the toss and fielded