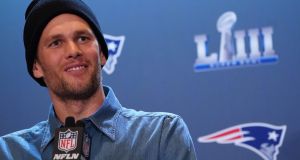 Six-time Super Bowl champion Tom Brady has agreed to terms on a two-year contract extension with the New England Patriots, according to multiple US media reports. Photograph: Getty Images

Tom Brady has insisted for some time that he can play into his mid-40s and it appears the New England Patriots agree.

Multiple sources reported on Sunday that the 42-year-old has agreed to a two-year contract extension with the Patriots, with whom he has won six Super Bowls. According to the NFL Network, the deal will pay Brady $70m and will take him through to the end of the 2021 season. Brady already has $212m in career earnings.

It was an open secret that Brady and the Patriots have been negotiating a new deal. The quarterback joked with reporters when he was asked if he deserved an extension recently. “Have I earned [AN EXTENSION]? I don’t know,” he said. “That’s up for talk show debate. What do you guys think? Should we take a poll?”

While Brady may not be at the peak of his powers he is still one of the best players in the league. He was recently voted the sixth best player in the NFL by his peers and he led the Patriots to the NFL title in February, his second championship in three seasons.

The Patriots owner, Robert Kraft, said before this year’s Super Bowl that he expected Brady to be his quarterback for the foreseeable future. “I would be quite surprised if he didn’t continue for quite a while as our quarterback,” Kraft said.