Brilliant Steve Smith and Australia turn the screw at Edgbaston 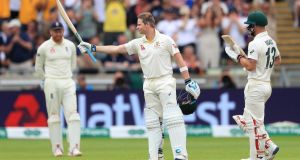 And so the English attack was blown to smithereens by you-know-who. Steve Smith, effortlessly taking charge of an increasingly unyielding strip of brown turf - at least for the faster bowlers – glided to his second century of the match, a new achievement for him in Test cricket. In the process he has helmed his side out of the choppy waters of Saturday evening into a position of calm serenity twenty four hours later.

At the end of the fourth day the outcome of the match is still unknown but it is now certain that England will not win it. They might draw it if they bat well. Australia were able to declare with a lead of 397 and inn the circumstances England’s latest opening pair did well to negotiate a tricky half an hour without being parted. Bear in mind that there has only been one draw in the last 33 Tests in this country.

It is not only the bowlers who are sending out SOS signals about Smith. So too are the scribes. We are running out of adjectives or fresh insights just as England are devoid of ideas about how to dismiss him. In this match he has exhibited a weakness in the 140s. He has offered a few chances during the 426 deliveries he has faced. No catches were spurned by the England fielders but there were three or four occasions when Smith might have been dismissed, all run out chances requiring a direct hit from a distant fielder. Otherwise he has seemed impervious to the wiles of the England attack.

Here was further confirmation that the middle is Smith’s natural habitat; he is at peace there, far more so than when in front of a microphone or in charge of a tour party. His control as he ambled up and down the strip was absolute, the placement of his strokes resembled that of top quality snooker player, using all the angles available on the green baize of the Edgbaston outfield. Along the way he demoralised English bowlers and enhanced his own colleagues, Travis Head (51) and Matthew Wade, who posted his third Test century in increasingly impish fashion as Australia built up their impregnable lead.

Joe Root, already minus Jimmy Anderson, was cast as the little Dutch boy putting his fingers in the dyke. Problem was he did not have enough fingers – or bowlers. It was always going to be tough for the faster men once the ball began to age but the expectation was that Moeen Ali would be influential on a pitch that was offering some turn, albeit slowly. However that expectation increasingly looked like a burden.

On Saturday evening Smith had gently shredded him. There is no disgrace in that but Moeen’s confidence was dented. The consequence was that he then bowled poorly against the left-handers, for who whom his off-breaks should have been a source of torment. Like most modern off-spinners Moeen has a fine record against left-handers, though maybe not Australian ones. His international record demonstrates that he has been far less successful in Ashes cricket than when playing against all the other sides in the world. Before this match he had taken 19 wickets against Australia at 66 apiece, which does not match his remarkable overall tally of 181 at 36.

Root understandably tossed the ball to Moeen immediately and while he may have bowled with a little more control than on Saturday his rhythm was still awry. There were no problems for Smith and very few for Head, who could often get off strike with a little dab square on the off-side. There were strange variations in Moeen’s action; sometimes he braced his right arm before moving into his delivery stride, like a darts player preparing to throw, which looks stilted and restricting; at others he was more loose-limbed, which seems more natural. Either way he could impose little pressure on the batsmen. It took him until his 26th over to take another wicket and his 27th to bowl a maiden. Nathan Lyon may be a different proposition on the final day.

The morning session yielded 107 runs and the wicket of Head, who was caught behind swishing at Ben Stokes soon after reaching his half-century. By lunch Smith had reached 98 so there was no doubt in anybody’s mind that he would notch a second century but there was some puzzlement as to why Chris Woakes had not been required to bowl a single over. By contrast Joe Denly had been used liberally in place of Moeen and had caused some problems when pitching his leg-breaks in the rough outside the off-stump of the left-handers. Mind you, even Shane Warne might have blinked at the prospect of bowling to just two run-saving fielders on the off-side.

Woakes was invited to bowl straight after the break but the pattern of the morning was maintained until there was a gasp all around Edgbaston soon after England took the second new ball. Smith was out! He drove loosely against Woakes to give Bairstow, who has been happier standing back than up in this match, another catch. By then Australia’s lead was 241 and England’s bowlers had run out of puff. Wade was improvising cleverly in the manner of a converted wicket-keeper and the runs were flowing. Soon he could celebrate his third Test century before being caught on the boundary’s edge off the indefatigable Stokes.

Tim Paine was bowled for a bright 34 by an exasperating beauty from Moeen and then there was some merry haymaking from Australia’s opening bowlers. They will have some more serious business to attend to on a final day that English fans - and batsmen – will not be relishing a great deal. - Guardian