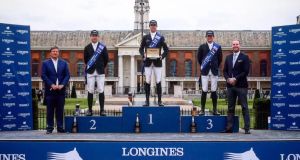 On the second of three days competition in front of the Royal Hospital Chelsea, 12 of the 33 starters progressed to the jump-off round of the 1.60m competition with four of these recording a double clear over a course designed by Ireland’s Alan Wade.

Britain’s Ben Maher claimed the first-place prize-money of €99,000 when stopping the clock on 35.98 seconds with Explosion W.

As Maher had already qualified for November’s LGCT Super Grand Prix at the Global Champions play-offs in Prague, the ticket passed down to Sweetnam who commented: “In the warm-up I was looking at who’s qualified and who hasn’t. I knew I wasn’t likely to win but thought maybe I could sneak into the Super Grand Prix. I am delighted to have qualified for it as it was in the back of my head today and I had my fingers crossed.”

At nine-years-old, Classic Dream was the youngest horse in the field and Kenny, who was last to go in the jump-off, said of the chesnut gelding: “I believe in Classic Dream. I took a risk but the horse is incredible, he felt amazing. I couldn’t have beaten Ben - my horse doesn’t have a massive stride like his does. There was no chance I would beat that time, so all I could so was my best.”

Earlier, Kenny partnered Ann Thompson’s 13-year-old Balou Du Reventon (65.40), to victory in a 1.55m speed class, the second competition of the London leg of the Global Champions League. Wexford’s Bertram Allen finished fourth with GK Casper (66.34). Allen’s Valkenswaard United completed the two rounds on a score of four faults in 132.26 to finish second in the team event which was won by the London Knights with the only clear.