England’s Rory Burns not worried about the how, just the how many 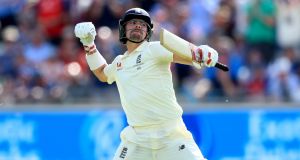 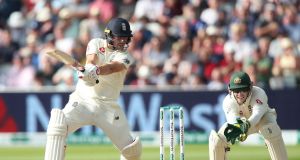 Here was a reminder of the old pro’s mantra, with which it’s hard to argue – “it’s not how but how many that matters”.

By common consent, which included the batsman’s own opinion, Rory Burns was not in great form before this Test match, yet there he was settling into his stiff-necked stance in his sixth hour at the crease, defying perspiring Australia bowlers on his way to his maiden Test century. A stunning achievement on a sun-kissed Friday afternoon in Birmingham.

Burns, ever more composed during his first experience of Ashes cricket, just kept soldiering on while delivering the innings of his life. He clipped the ball neatly off his legs whenever the opportunity arose; he square-cut the off-spin of Nathan Lyon if the ball was dropped short; he shuffled into line against the straight ones and was none too bothered when beaten by the wider ones, which was quite frequently especially in the view of exasperated Australian onlookers. He also sliced, carved and edged a few, magically eluding whatever formation of slip cordon Tim Paine had stationed.

It was not an elegant innings but who cares? Elegance is unlikely to be a prime consideration for Burns – he may not consider it all – but his system worked wonderfully well. He grafted and scurried in the tradition of faithful left-handed English openers of the past, who were all worthy of admiration even if they did not have latecomers sprinting to the turnstiles: Geoff Pullar, John Edrich and, more recently, Alastair Cook.

Burns knows that he has not reached their standards yet. But after an innings of such resolution and phlegm he will now have the chance to enhance his Test career throughout the rest of the summer. His place is secure for a while; and just wait until he hits form.

These were runs that mattered – against Australia in the opening Test of the series – and they were all the more impressive given his recent form; Burns had not passed 50 since the middle of May, chalking up six in each innings against Ireland at Lord’s.

It took a while for him to reach those coveted three figures. On 88, he struck a crisp cover drive against Pat Cummins, a stroke as fluent as any that he had played all day but that did not presage a sprint towards his maiden Test century. He did not score for another half an hour. Then there was the odd single and a timely leg glance to the boundary; a nudge to the left of mid-on against Lyon and he was there punching the air before being locked in a bear hug with Ben Stokes.

The second day was a better one for batting; the sun was out, the pitch was a mellower brown, yet there seemed to be enough movement to encourage the bowlers in the first hour. After an edged boundary Jason Roy pushed hard at a fine delivery from James Pattinson and the ball sped into the safe hands of Steve Smith at second slip.

There were no free runs to be gleaned thereafter. Lyon was introduced early and found some turn. When Burns was on 21 the off-spinner declined to review an lbw appeal that had been rejected by Joel Wilson. The replays revealed that any review would have been successful. Perhaps Australia were not inclined to waste one on a batsman who had been so out of touch.

Meanwhile, England’s latest No 3, Joe Root, was always watchful and sometimes tentative. When he was on nine there was a concerted appeal from Pattinson for a catch behind the wicket. Wilson’s finger was raised, Root reviewed and we soon discovered that the ball had indeed touched wood, but it was the wood of the off-stump. Somehow the bail declined to move, which seems to happen ever more frequently.

On 14, when facing Peter Siddle, Root sought another immediate review when confronted by Aleem Dar’s finger, correctly confident that the ball had taken a firm inside edge.

This was tough, taut fare as England mustered 61 runs in that first session.

Runs came more freely after lunch when Root finally began to find the boundary with a series of deft glides and clips while Burns willed himself onward. They had added 136 when Siddle made the breakthrough. A firm-footed drive from Root sped from the middle of the bat into bowler’s slipway as he followed through. Siddle stuck out his right hand and there the ball came to rest. A pure batsman would have chided himself for not getting on top of the ball, a Botham would have been furious that he had not hit the ball harder and higher.

Now the innings faltered. On either side of tea Joe Denly played two delicious cover drives but he fell soon after a ball change – it seemed the replacement was more willing to swing. Denly wisely declined to review when struck on the pads by a full-length delivery from Pattinson.

Stokes now became a trusty ally for Burns. He saw him to three figures and survived the immediate recall of Lyon upon his arrival at the crease, a transparent adherence to some dossier despite the fact the ball was swinging around.

Paine took the second new ball as soon as it was available, juggling his bowlers feverishly. This time they tried a review for lbw against Burns to no avail. After five overs Lyon was recalled.

Even now England’s opener was not batting flawlessly yet he was still heroically unbeaten at the close with the deficit reduced to 17. – Guardian