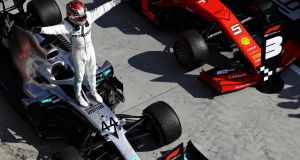 Lewis Hamilton won the Hungarian Grand Prix with a marvellous, controlled run and an inspired strategy from his Mercedes team beating the Red Bull of Max Verstappen into second after a gripping encounter at the Hungaroring. Sebastian Vettel finished third, with his Ferrari teammate Charles Leclerc fourth. Carlos Sainz took an excellent fifth, his second in a row for McLaren, in front of the second Red Bull of Pierre Gasly.

This was yet another masterclass from Hamilton and Mercedes who called the race to perfection, one of the best wins they have returned this season. It had hung in the balance throughout but – although Verstappen had led almost the entire race until the death – by its close Hamilton, on fresher rubber, swept past him to take the flag. Mercedes decision to pit their driver a second time giving Hamilton a decisive advantage he exploited brilliantly.

Hamilton’s 81st career win is also his seventh at the Hungarian Grand Prix. He has won three of the last four meetings at the Hungaroring and now has eight wins from 12 races this season as F1 heads into the summer break. Knowing that overtaking is tricky through the twisting corners of the circuit, he believed that his team would have to play a strong strategic game to ensure he could gain places and they proved more than up to the task.

The team went through an extensive debrief after performing poorly in Hockenheim and duly came back with another display of precision execution, with Hamilton at the sharp end, delivering once again with a clinical drive.

The British driver leads Bottas by 62 points with Verstappen 69 points back in third and Vettel 25 points behind the Dutchman in fourth. With nine races remaining Ferrari’s task is insurmountable and their fight is for third.

Hamilton and Mercedes had expected their car to be strong on the slow and medium-speed corners of the Hungaroring. The Red Bull, however, was also clearly in excellent form through he frequent direction changes of the Hungaroring with their strong aerodynamic package. But although Verstappen had the advantage in qualifying, in race pace Mercedes were on top.

Verstappen made a good start and Hamilton hared after him, side by side with Bottas through the first turn. Hamilton had squeezed ahead round the outside of turn two and just touched his teammate as he took second place in three. Bottas went wide and lost third place to Leclerc, with whom he also had contact and then Vettel passed the Finn, who had taken front wing damage from the hit with Leclerc.

Bottas was losing time and pitted for a new nose on lap six, emerging in last place, from where he could recover only to eighth. Out front Verstappen and Hamilton were matching one another with almost metronomic precision, the gap of 2.3 seconds holding for lap after lap as they began stretching away from the Ferraris.

Hamilton then closed to within just over a second as Verstappen began losing grip from his tyres. There was tense moments, Verstappen repeatedly complained about his rubber, while Hamilton felt he could go much longer. Red Bull brought their man in for his only stop on lap 25 and Hamilton was told to push. The British driver came in on lap 31, for the hard tyres and emerged still in second, five-seconds down but with rubber that was six laps fresher than Verstappen.

He flew after Verstappen, taking almost two and a-half seconds out of his lead in two laps. He had caught him by lap 34 and his pace was superb. He climbed all over the back of Verstappen who defended stoutly. With Hamilton harrying, on lap 39 they went wheel to wheel through turns one to four, in a thrilling battle. Hamilton went wide in a brave bid to pass on the outside of four as Verstappen held his place. It was clean, gripping racing.

Hamilton dropped back to cool his rubber, having used the best of his additional grip in the assault, when Mercedes pulled him in unexpectedly for a second stop to take the medium tyre and he emerged in second. It was a bold move, Red Bull did not respond to pit Verstappen immediately and their chance was gone as Hamilton set off to make up the 20 seconds he needed to catch the Dutchman.

Hamilton had the fresher rubber but Verstappen track position. Mercedes had gambled and it looked to have failed as Hamilton moved through traffic and could not close the gap fast enough. Yet in clean air the British driver pumped in fastest laps and with Verstappen’s rubber gone had caught him by lap 66. Hamilton, relentless, was not to be denied, he swept past round the outside of turn one a lap later to take the lead and the win.