Ian O’Riordan: Spotting the difference between talent, genius and madness 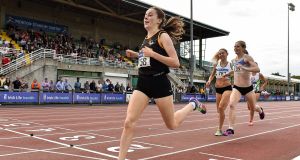 Sarah Healy: seven days after winning the silver medal at the European Under-20 Championships in Sweden, she won her first senior 1,500m title in utterly convincing style. Photograph: Sam Barnes/Sportsfile

I met Brendan O’Neill for a pint in the Blue Light on Thursday and we got talking about talent and genius and madness and our strange obsession with success in this sport.

It was one of those sweet summer evenings that makes living up in the Dublin Mountains feel like a genius move, as opposed to other times of the year when it can feel like complete madness. The sun was still warm and the sky ablaze with light over the perfectly panoramic view from Killiney Hill and across Dublin Bay to the tranquil outline of Howth, and the conversation wasn’t the only thing flowing.

I’ve known Brendan for years, a clearly talented junior from around my old breeding ground of Dundrum, who in 2010 announced himself as one of our most exciting distance running prospects when winning a European Cross Country gold medal with the Irish under-23 team. They all appeared on The Late Late Show the following Friday and the least of anyone’s expectations, including his own, was that some day he’d run in the Olympics.

In 2012 he ran 13:41 for 5,000 metres, about 20 seconds off the Olympic qualifier, with a reasonable assumption he could chip those seconds off in the four years to Rio.

He graduated from DCU then transferred to Florida State University, only not long after that he began to realise that talent only goes so far without the right support and coaching and training environment.

“And of course luck,” he says, and so he retired, sensing some madness in continuing, and instead focused his energy on his business ventures, which believe me may turn out to be a genius move.

That point about talent only going so far is that it’s an all too familiar scenario. There is nothing more common in sport than wasted talent, or a once promising career left in talented ruins.

The problem is that we sometimes put unnecessary and unfair expectation on young sporting talent, something we seem particularly good at in this country, when for a whole variety of reasons (including luck) those same athletes may not reach any higher level of success.

Two headline events, the women’s 1,500m and 100m, were both won by teenagers. Seven days after winning the silver medal at the European Under-20 Championships in Sweden, Sarah Healy won her first senior 1,500m title in utterly convincing style, the 18 year-old from Blackrock AC hitting the front with a lap and a half to run and not once looking back.

Not long before that 19-year-old sprinter Ciara Neville from the Emerald Club in Limerick produced a championship best performance of 11.33 seconds to properly announce her arrival onto the senior stage.

Only Phil Healy’s Irish senior record of 11.28 is faster, only for both young athletes there is already some burden of expectation around what they might do next, exactly how much faster they can run.

It doesn’t always have to be that way. Sometimes success is best recognised in the here and now, just like winning a European Cross Country medal at under-23 level, and not winning anything else after, is no failure. There is certainly no failure in being the best you can possibly be at any given time.

It was the same point made this week by Dublin under-20 football manager Tom Gray, about 18 year-old Ciarán Archer, who has scored 9-30 in the four games it has taken them to reach this afternoon’s All-Ireland Under-20 football final.

Plenty of other young Dublin footballers have shown equal promise at his age and never played senior for Dublin, and it’s more important to enjoy his success for what it is now, rather than what it might become. Even when that’s a 22 -year-old Egan Bernal, the third-youngest Tour de France winner in history, and the youngest in more than a century.

Con Houlihan always had plenty to say about that, probably because he was a part of that rare breed. When it came to his favourite poets such as William Blake or Arthur Rimbaud he always said their genius was closely aligned to their madness, only in the creative way, and I remember one of his favourite Gaelic footballers who he invariably described in positively glowing terms as a “mad bastard!” There is often that side to the sporting genius too.

Con left behind plenty of genius lines of his own with us before, seven years ago, he went off into the good night, or rather the good morning, on that first Saturday in August 2012.

On those special evenings at what he called his harbour in Portobello, events invariably began with him pulling out an old €20 note from under the telephone next to his soft white chair and politely insisting I go round the corner to Spar and purchase two bottles of Yellow Tail, describing it as “easily drinkable”, which it most certainly was.

He did occasionally call for an intermission and served up mugs of Barry’s tea or small thimbles of Courvoisier cognac, during which time he’d get a little more reflective.

As is well recognised, nothing dismayed Con more than the gradual decline of the correct use of the English language. Even in his early days with The Kerryman the signs were there, when he once heard a certain sports reporter say to the editor, Seamus McConville: “You are capable of thinking that a colon is part your backside”.

This is right up there with one of his own – “that a man who will misuse an apostrophe is capable of anything” –, which like any successful line speaks of the eternal and to eternity, pure and simple genius.