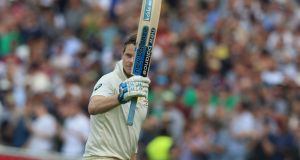 Well, what did you see my blue eyed son? And what did you see, my darling young one? I saw a man batting without a chance for 149 overs. I saw Joe Denly bowling in mid-afternoon. I saw a thousand pad-roll fiddles and five hundred box-flicks. I saw a game and a series and a career defined.

And yes, like everyone else I saw quite a lot of Steve Smith. The fourth day of this first Ashes Test may have ended with England’s openers battling for survival, set an impossible 398 to win and a day to play out for a draw. But once again the chorus, the melody, the rhythm of the occasion belonged to the greatest Test batsman of the age.

From early morning to mid-afternoon Smith reeled off his second mind-bendingly fine hundred of this match and his 25th in his past 54 Tests. This is a man operating at a pitch that no longer requires a nod to the records of the noble dead, use of the phrase “not since” or sepia references to childhoods hitting a golf ball against a water tank with a stump. Right now Smith is simply in a space all of his own.

Throughout this Test a weather-beaten busker has been stationed outside Edgbaston, running through a repertoire of Bob Dylan standards as the crowds depart. At the end of day two he warned that the times were a-changing. As the skies opened at the end of day three he’d been absent from his post, but the message was still clear. Smith was on 46 at the close and not just playing nicely but wreathed in a peculiar sense of destiny. This match was already edging one way. And, for England, a hard rain was going to fall.

So it came to pass on the fourth day as Smith batted in a way nobody has ever really batted before, en route to a chanceless 142 off 207 balls. The small details, as ever, were gripping, each one seeming to capture some part of what he does and how he does it.

Half an hour into the afternoon session Moeen Ali came on to bowl. Australia were 261 for four and Smith was on 115. Moeen bowled a horrible half-tracker. Smith clattered it, but only as far as the deep midwicket fielder; he grimaced and stamped his feet and seemed close to beating his own brow in frustration as he ran the single.

And yet even in the middle of this personal anguish Smith could be seen veering in a sudden loop across the pitch, brain whirring, aware that Matthew Wade is left-handed, that Moeen will change the angle for his second ball and so naturally he, Smith, must sprint as fast as possible across the wicket in order to continue his self-castigation in the most efficient fashion.

Shortly afterwards he came hopping out to another Ali off-break and punted a glorious on-drive to the fence, as though scrubbing out that fault in the programme.

On days like these Smith is the opposite of a highlights player. To appreciate him it is necessary to lose yourself in the forces around him just as he does. Watching him ease his way through the morning session there was even something oddly devotional about those rituals between deliveries. Pad roll, pad roll, helmet and box. Spectacles, testicles, wallet and watch. This all has a function, a way of resetting, of clearing his history and focusing only on the next page.

The usual spirit-sapping stream of singles appeared through the leg side. In between Smith drove with thrilling, easy power through the covers. And England’s bowling began to look a little thin, its weak points teased out and pulled apart.

Smith just seems to have a more powerful processor, to have extra information flashing across his circuit boards at times like these. Those twitches and fidgets, the whirling leaves: these are all part of the calculations, minority reports, ticker tape spooling out of the computer bank en route to the right answer.

Perhaps this is why he seems to be operating at double speed. Has any batsmen ever had so much time to play his shots? At one point Ben Stokes bowled a full slower ball and Smith seemed to weigh up four or five options, to revise his calculations, have a chuckle to himself, then finally dink it away with a cuff. The next ball was pitched up and driven with startling power from a totally static position, just the way he felt like playing it in the moment, to take him on to 93.

Ah yes, the numbers. In the rush to appreciate all this brilliance there has already been a blizzard of Smith stats, with a search for the best, the most apt, the most clinching of Smith numbers.

How about this one? England had Smith out for six, seven, five and six in successive innings at Edgbaston and Trent Bridge four years ago. Each time he was caught behind the wicket fending at a full ball early on. Since then he has scored 1,100 runs against England at 158. Lol. Maybe there was a plan in there somewhere.

Edgbaston rose to Smith as his hundred arrived in the afternoon sun. Perhaps the story of this series will be his journey from boo-magnet, pariah and enemy of the boorish, to a sporting phenomenon to be treasured whatever your passport. As England battle to save this match there will be a wider sense of dread that this process is only just getting started.