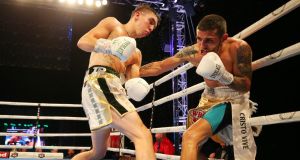 A hand injury almost derailed what was in the end a carefree victory for Michael Conlan in The Falls Park, Belfast on Sunday morning. The former amateur world champion improved his unbeaten record to 12-0 with a ninth-round stoppage over Argentinean Diego Alberto Ruiz.

The Irish featherweight was defending his WBO Inter-Continental belt and picked up the WBA version with the one sided victory.

Conlan’s dominance throughout was rewarded when a right hand that caught Ruiz in the ninth was followed by a flurry of body shots. Ruiz’s corner, where his father was part of the team, flagged to the referee that the contest should end 1 minute 34 seconds into the round.

Conlan revealed afterwards that he had hurt his hand during the bout and had to change the way he fought. His regular tactic of moving from southpaw to orthodox was plainly on view as the 27-year-old freewheeled through the first five rounds with nothing much coming back at him from his 25-year-old opponent.

An oddly muted Belfast crowd, not helped by the pouring rain, could see that Conlan, despite his hand, was cruising through the fight. Ruiz was landing little to nothing and in the final round went on to his knee claiming Conlan had landed a low blow. Replays showed Conlan, although warned earlier in the fight, had not landed low. His opponent had taken enough and seconds later Conlan was finishing the bout.

“I’m a very adaptable fighter,” he said after the win. “I always have been from the amateurs. I can box in close and the distance. It (hand injury) forced me to box in a better way and get it finished. Unfortunately my next fight will have to be pushed back a bit but I was happy that I was able to figure it out.”

As Ruiz asked little from the Belfast fighter, little was learned of how he performs under more aggressive pressure, although the evidence is Conlan has the boxing tools to step up another level. His fans will be looking for more explosive power but given that he dominated all nine rounds with an injury any criticism seems churlish. His next move will wait but already there is talk of a world title fight next year.

Former Irish amateur champion Sean McComb, 26, also gave a glimpse of his ability and potential to be the next big Irish performer when the super lightweight eased past veteran campaigner Renald Garrido. The Frenchman, although not stopped, was schooled through all eight rounds by Belfast boxer.